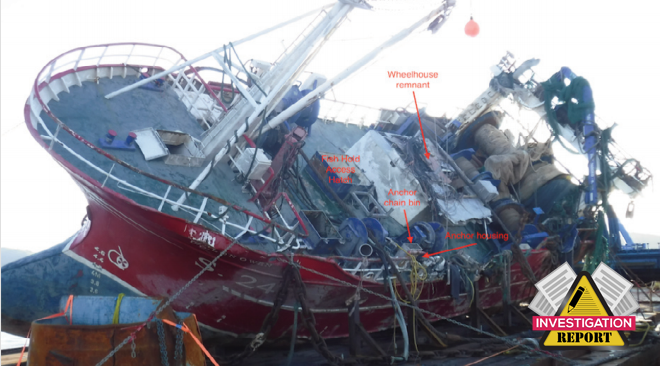 Ireland's MCIB issued an investigation report on the grounding and sinking of the fishing vessel 'FV Dillon Owen' in Ardglass Harbour, in October 2019. The report identified several safety issues, including lack of a formal passage plan, failure to observe the harbour’s navigation aids and the watchkeeper’s loss of spatial awareness.

On the morning of the 23rd October 2019, the ‘FV Dillon Owen’, whilst approaching Ardglass Harbour, Northern Ireland, lost power and drifted onto rocks at Phennick Point.

The five crew members were airlifted to safety. Attempts by RNLI lifeboats to tow the vessel were unsuccessful and the fishing vessel remained on the rocks pending a salvage operation.

The ‘FV Dillon Owen’ sank over the following days. The wreck was recovered and sent for demolition. There were no injuries or pollution.

This incident was a sequence of three distinct events: the initial grounding; the loss of power; and finally the second grounding and sinking of the ‘FV Dillon Owen’.

The initial grounding at the entrance to Ardglass Harbour had a number of causative factors:

The magnitude of the vessel’s impact shortly after 03.54 hrs, the vessel’s AIS track of speed and position and the photographic evidence of damage, indicates that the vessel struck the ground on it’s starboard side, at or on the shallow water shelf south of Ardtole Beacon, with sufficient force to rupture the hull plating of No.4 fuel tank and open the tank to the sea. There is no evidence to show that the impact of the first grounding event caused the vessel to be fatally damaged at this time.

The rupture of No.4 fuel tank immediately filled the tank with seawater and the practice of continually circulating fuel oil through the CJC filter in turn contaminated the daily service tank supplying fuel to the main engine and the generators, causing the vessel to lose electrical and propulsion power.

If the transfer and recirculation of fuel from the bunker tank through the CJC unit into the Day Tank had been stopped as the vessel approached shallow waters and restricted navigation, or if a procedure was in place to stop this pump should a suspected grounding event occur, then the Day Tank fuel contents would not have been contaminated and the vessel would not have lost power after the first grounding.

The causal factor leading to the vessel’s second grounding on Phennick Point was failure of the crew to deploy the primary anchor as the prevailing wind sea direction drove the powerless vessel towards the north shoreline and Phennick Point. The depth of water here was shallow enough to drop an anchor in order to stop the vessel’s drift. By first focusing on attempts to release the trawl doors the crew lost valuable time.

The ‘FV Dillon Owen’ had not lost its anchors and timely release by the crew of the vessel’s primary anchor at this time would likely have averted the vessel’s second grounding at Phennick Point. 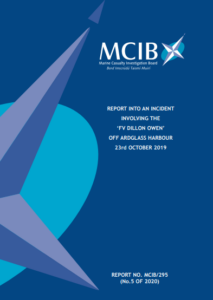