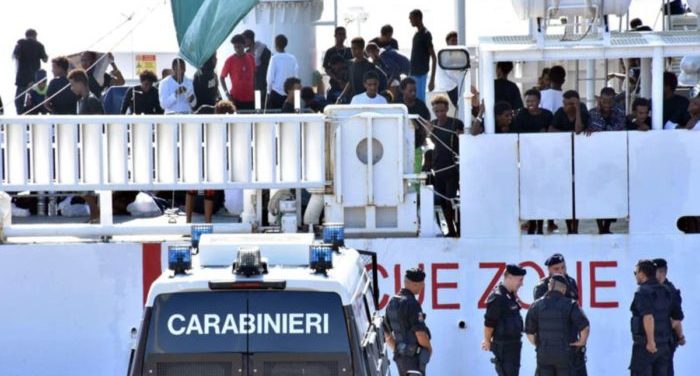 Italy’s minister of the interior, Matteo Salvini, has allowed migrants of the Italian Coast Guard ship ‘Ubaldo Diciotti’ to disembark, after he was placed under formal investigation regarding their detention.

Matteo Salvini has taken a step back by allowing the more than 100 migrants to disembark the ship, as before he was refusing to do so unless he received reassurances that the migrants would go elsewhere.

Now, Mr. Salvini has been formally placed under investigation for potential illegal detention and kidnapping. After this, the minister of the interior allowed the migrants to disembark. Namely, Albania will take in 20 of them, while Ireland will take 25.

The investigation was launched last week, by Luigi Patronaggio, chief prosecutor for Agrigento, while magistrates went to Rome to question Mr. Salvini, members of his staff and at least two high-ranking officials in the ministry of the interior.

Initially, the magistrate did not rule out questioning Matteo Salvini himself, but after interviews with his staff, prosecutors decided that such a thing was not necessary, the Guardian reported.

For his part the minister noted that he would be ‘ready and proud to be arrested’ as he is ‘fighting to defend the Italian border.’

Ubaldo Diciotti’ rescued 190 migrants last week from an overcrowded boat. 13 were evacuated to Italy be treatment, but the ship did not bring the rest to shore and stayed in international waters. After that Italy and Malta started a standoff about who should take them, as the boat had first passed through Malta’s search-and-rescue area.

Finally, Transport Minister Danilo Toninelli announced that the ship will dock in Catania, without saying when, urging Europe to ‘do its part,’ Reuters reported.

In the meantime, charities and NGOs working with refugees and migrants expressed their concerns about their situation.