Catamaran Sea Jay, the vessel with a red main sail cover, seen docked at the end of Hinckley pier after the accident. (Source: US Coast Guard)

The National Transportation Safety Board issued an accident report of a collision that took place on West Branch of Stamford Harbor, Connecticut, between two vessels and led to a slight oil spill and to a damage which costed $300,000, yet with not injuries.

On September 17, 2018, the tugboat Seeley, which had five crewmembers onboard, was upbound on the West Branch of Stamford Harbor, Connecticut, pushing two sand barges, Weeks 207 and Weeks 213.

During the 21 minutes of leaving the mooring, the tow, traveling at just over 3 knots, entered the West Branch of Stamford Harbor. Although the West Branch measures approximately 600 feet between its opposite shores, marina piers and docks lining both sides narrow the waterway to as little as 130 feet.

The mate pilot assessed the weather conditions and the location of vessels and maneuvred the two barges at the same time, saving the time it would take to dock one barge at a time.

Yet, when during the maneuver, Weeks 207 struck the Sea Jay, the tripping maneuver continued until the barges were brought together.

Later on, the Seeley mate reported to investigators that because the tow was still in the navigable channel, he did not want to obstruct other vessel traffic and so he continued with both barges to the terminal and moored them.

Additionally, the collision damaged an oil line on the Sea Jay, which resulted to it spilling oil into the bilge. This oil mixed with water and was pumped overboard by one of the Sea Jay’s small automatic bilge pumps.

Responders noted the sheen and contained the spill with absorbent boom; they subsequently removed the oil using absorbent pads. The Sea Jay was towed that same day to a boat yard for repair of its port hull and deck. The dock and Weeks 207 were undamaged in the accident.

NTSB suggests that what caused the collision was the Seeley mate’s decision to perform a tripping maneuver in a narrow channel near surrounding piers and docked vessels, despite the availability of an appropriate turning basin only about a tow length ahead.

To explore more on the accident report click herebelow 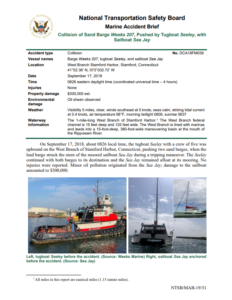