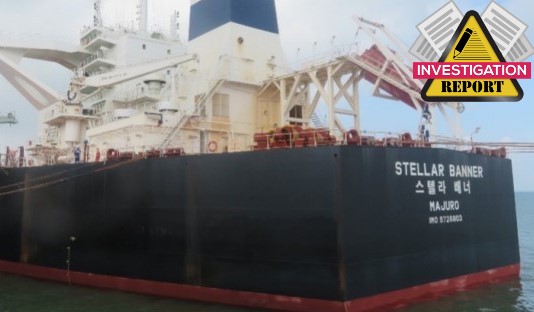 The Marshall Islands flag registry published the final report on the loss of the Stellar Banner, the very large ore carrier (VLOC) that grounded off Ponta da Madiera, Brazil in 2020.

At 1411 on 24 February 2020, two pilots from the Ponta da Madeira Terminal embarked Stellar Banner for the outbound transit of Baía de São Marcos. It was reported that the pilots had been scheduled to board the ship at 1330.

At 1442, Stellar Banner got underway laden with 294,871 MT of Iron Ore. This was approximately 40 minutes after the ship’s planned departure time and about 50 minutes after low tide. The ship’s drafts on departure were 21.33 m forward, 21.5 m midships, and 21.43 m aft. The estimated date of arrival at the planned discharge port was 4 April 2020.

At 1524, the pilots disembarked after the ship had passed Isla de Medo to starboard and entered the approach channel marking safe passage through Baía de São Marcos.

Just before 2000, the 3/O relieved the C/O as OOW. Based on the audio recording from the ship’s VDR, the Master told the C/O to take a rest but that the C/O could return if he was curious about the progress of the outbound transit.

Based on the VDR audio recording, the Master called the 2/O at 2002 and told him that he should come to the Bridge at 2100. He also told the 2/O that he expected that they would keep going.

At about 2030, the ship passed buoy No. 6 to starboard. This was where the passage plan indicated that the ship’s course should be changed from a base course of 057° T to 029° T. The planned speed was 10 knots. Rather than changing course as planned, STELLAR BANNER remained steady on a course of 057° T at a speed of 11 knots.

KR conducted a damage stability assessment after being informed by the Company that Stellar Banner may have contacted the bottom. This assessment assumed that the FPV, Nos. 1 and 2 starboard WBTs, and the DBV were fully flooded. It was determined that fully flooding these tanks would cause the ship to list between 6-7° to starboard.

This list would submerge the starboard main deck aft to approximately frame No. 85 and partially submerge the starboard side outboard portion of the hatches for Cargo Holds Nos. 1 and 2. KR advised the Company that the ship should be moved immediately into shallow water. The time KR made this recommendation to the Company was not reported to the Administrator. 96. By 0400, the Master determined sea water was flooding the damaged tanks and voids faster than the ship’s fixed and portable pumps could pump it out. In consultation with the Company the Master decided to intentionally ground Stellar Banner.

Causal factors that contributed to this very serious marine casualty, according to the report, include:

The following recommendations are based on the conclusions and in consideration of the preventive actions taken.

It is recommended that the company: