Masterplanning is crucial for ports’ development

The British ports Association along with ABPmer issued a white paper highlighting the importance of masterplanning to the development of coastal regions, as well as improve ports' communication through their strategies and visions with stakeholders.

The paper aims to help local, regional and national planners become aware of the potential of masterplans.

Both partners believe that a masterplan is a useful way that ports can follow to shape and communicate their strategic plans by engaging with regional planners.

The BPA is calling on central, regional and local policy makers to take note of port masterplans so the potential of ports can be included in wider strategies.

A masterplan outlines how a port intends to respond to change. It begins with what is happening at the port now, and why. It then explains what needs to happen in future. By going through the masterplanning process, ports can describe how they can facilitate development and investment whilst building in stakeholder interests.

The advantages of port masterplanning are:

In addition, port masterplanning understands the nature of the rapid commercial, environmental, technical and social changes that are expected to hit economies over the coming decades.

Also, it responds appropriately to such changes.

We are also keen that the UK Government updates its Port Masterplanning Guidance for English ports which hasn’t been refreshed for over a decade. This needs reviving and we’d like to encourage some discussion with the devolved administrations as to how masterplanning might be recognised in other parts of the UK.

To learn more click on the white paper herebelow 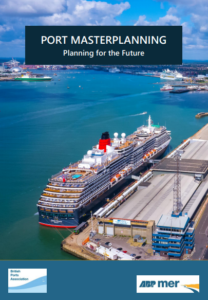