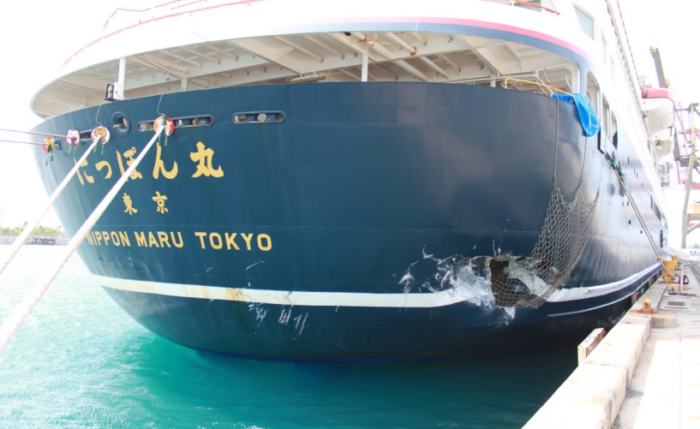 The National Transportation Safety Board (NTSB) issued an accident report according to which on December 30, 2018, the passenger vessel Nippon Maru struck mooring dolphins at a US Navy fuelling wharf in Apra Harbor, Guam, revealing that the master had consumed alcohol before and after the accident.

About 0645 on December 30, the Nippon Maru arrived in Apra Harbor for a daytime port call and was berthed port side to wharves F-4 and F-5 in the harbor’s commercial port.

The third officer informed investigators that his duties on the bridge included monitoring the vessel’s electronic charting display and information system (ECDIS) and providing backup to the master, who would have the conn.

The pilot added that when he arrived on the bridge, the master was not there, so he proceeded to the port bridge wing to wait. The master arrived a few minutes later and, according to the pilot, stated, “We are ready to sail.”

The master would then use the Nippon Maru’s bow thruster, and the pilot would use a tugboat made up to the stern to pivot the vessel around before heading outbound.

The master told investigators that he originally intended to turn the vessel around to starboard, but the pilot recommended turning it to port, to which the master agreed.

NTSB informs that expect this brief discussion, there was no other communication between the two. According to the pilot, a formal master/pilot exchange, which was required by the Nippon Maru’s SMS, was not conducted.

All radio communications between the master and crewmembers were in Japanese, but the pilot did not speak or understand Japanese

During the vessel's turn, the master informed that he intended to move the control joystick to starboard to assist with the turn, but because he had lost his “sense of orientation,” he mistakenly moved the joystick aft, providing astern propulsion.

Following, the third officer again warned the master in Japanese that the joystick was at full astern. Two seconds later, the second officer reported that the Nippon Maru had hit an oil boom that surrounded the D wharf. Four seconds after that, the third officer yelled in English, “Ahead! Ahead!”

At the same time, the third officer tried to take control of the joystick by moving it to the ahead position, but the master immediately moved the joystick back to the astern position.

The strike opened a large hole in the starboard side of the Nippon Maru’s stern and a gash in the port side stern. Both of the concrete dolphins at the D wharf were damaged in the accident, and a catwalk that spanned the gap between the dolphins was destroyed.

After the incident, during the investigationsthe pilot said that as he prepared to leave the ship after the accident, he smelled alcohol on the breath of the master. He said that prior to this time he had not been close enough to the master to detect the odor.

In reply to that, the master told investigators that he drank one can of beer about 1300 on the day of the accident and had no other alcoholic beverages before getting under way.

However, in a statement made to the Japanese Ministry of Land, Infrastructure, Transport and Tourism about 2 weeks after the accident, the master reported that, between 1700 and 1800 on the accident date, he drank one and a half cans of premixed whisky with soda; Whereas, in the Report of Marine Casualty submitted to the US Coast Guard that he drank a can of beer after the accident, between about 2300 and 2400, to “calm my mind.”

According to the Coast Guard report of mandatory chemical testing following a serious marine incident form, the master had a positive alcohol screen at 0215 on December 31, about 5 hours after the accident, with a confirmatory positive breath alcohol test of 0.071 g/dL (grams per deciliter) at 0230.

The NTSB states that the probable cause of the passenger vessel Nippon Maru’s contact with the mooring dolphins at the US Navy wharf D in Apra Harbor, Guam, was alcohol impairment of the master while he conned the vessel, resulting in an errant astern engine input.

Guidelines in part B of the STCW Code on watch-keepers recommend seafarers should not consume any alcohol within four hours of going on watch. The master of the vessel is responsible to commit to the program and monitor seafarers in following the program as well.

The Shipowners Club has issued a revised edition of its 'Drugs and Alcohol at Sea' booklet, to assist with the prevention of related incidents as well as encouraging healthy lifestyle choices and the positive wellbeing of seafarers. 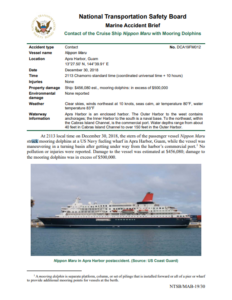