Man loses life as he was dragged overboard by fishing gear

UK MAIB published its report on a man overboard incident from the single-handed creel boat Sea Mist. The incident took place on 27 March 2019, and resulted to the loss of one life.

On 27 March 2019, Sea Mist’s skipper and his son, the skipper of the creel boat Ocean Lee, arrived at Macduf harbour to start a day’s fishing. Once on board their respective vessels, both men put on their PFDs and set out towards the harbour entrance.

At about 1233, Ocean Lee’s skipper saw that Sea Mist was circling, with no sign of his father either on the fishing boat or on the sea’s surface. He then called the Macduf harbourmaster on VHF radio and asked him to alert the coastguard of a possible missing fisherman.

Ocean Lee’s skipper headed towards the circling Sea Mist, and as he approached, he saw that one of Sea Mist’s back ropes had become caught around the bow, causing the vessel to turn in circles. To stop the fishing vessel, Ocean Lee’s skipper drove his vessel into Sea Mist on its starboard side and boarded the vessel. After that, he placed the engine throttle to neutral, stopped the engine and dropped the anchor. Ocean Lee’s skipper then returned to his own vessel and confirmed to the harbourmaster that his father was missing. At the same time, the Macduf RNLI lifeboat was tasked by the coastguard.

Thinking that his father must have become entangled with his fishing gear and dragged overboard while shooting his last leader, Ocean Lee’s skipper began to recover his father’s creels in an attempt to find him. As he did not know which of the leaders had been laid that day, he started with the closest one searching for newly baited creels. A little later he saw his father’s baseball cap floating in the water.

At 1257, the Macduf RNLI lifeboat arrived on scene and approached Ocean Lee, whose skipper informed the RNLI lifeboat crew that his father was wearing a red PFD in addition to his usual fishing clothing.

After confirming that Ocean Lee’s skipper did not require help to lift the leaders, the RNLI lifeboat launched an expanding square pattern search of the sea, using Sea Mist’s anchored position as the datum point.

At 1309, Ocean Lee’s skipper recovered a leader that had one of his father’s wellington boots caught in it. He immediately informed the RNLI lifeboat crew, who re-started their expanding square search using the position of this leader as the datum point.

By 1314, the rescue helicopter was on scene, and at 1321 the helicopter’s crew spotted Sea Mist’s skipper floating face-down just under the sea surface. He was not wearing a PFD. The RNLI lifeboat crew recovered the skipper and transferred him to the helicopter, which proceeded directly to the Royal Aberdeen hospital.

Sea Mist was recovered by the two RNLI crewmen on the harbour launch. When they got on board the fishing vessel, they noticed a red PFD hanging up in the wheelhouse.

According to UK MCA, Sea Mist’s skipper drowned because he was dragged overboard by the fishing gear and could not free himself or survive on the surface. He was also probably trying to free a snagged creel when he became entangled in the back rope.

There was no method of separating the crew from the fishing gear on Sea Mist’s working deck. Had there been, the likelihood of this accident occurring would have been significantly reduced

What is more, Sea Mist’s skipper was not wearing a PFD when he entered the water. Although the circumstances of his drowning are unknown, a PFD would have increased his chances of survival. 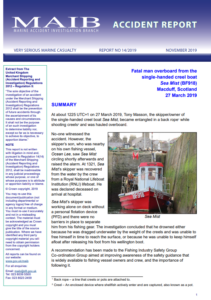