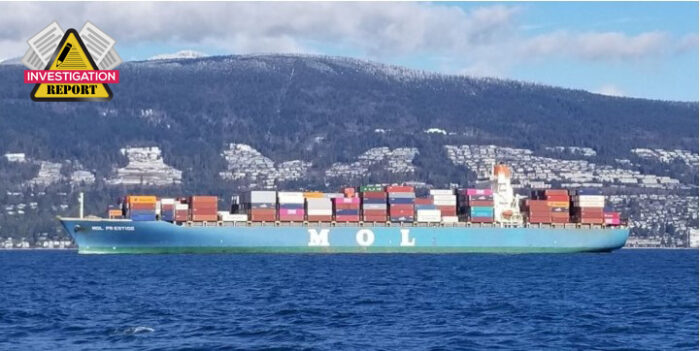 In its latest investigation report, the Transportation Safety Board of Canada (TSB) determined the causes that led to the January 2018 engine room fire on board the container vessel MOL Prestige in Haida Gwaii, British Columbia (BC).

On January 31st, the engine room crew held a toolbox meeting, after which they discovered that the condenser tubes in the generator were leaking.

Just before 21.15, white fumes were observed coming from the top of the auxiliar boiler near the settling tank. Motorman 2 started up the stairs to deck 2, to the area where the fumes were present. It was then observed that the fumes were increasing and were being sucked into the the main engine turbocharger. At the same time, the third officer informed the master about the fire and also called the ECR.

A little later, fumes were observed behind the elevator shaft and above generator engines 3 and 4. At this time, the master told the third engineer that there was fire in the engine room.

Once the remaining crew had entered the ECR, the chief engineer arrived in the engine room, but no smoke or fumes were observed.

At 21.18, CCTV shows oil spraying onto the oily bilge water separator located on the bottom deck. Motorman 1 exited the ECR when he observed smoke and flames on deck 3 near the auxiliary boiler area. The junior engineer informed that he had inadvertently turned off the boiler circulating pump on deck 4.

A few moments later burning oil and flames were observed near the stairs between deck 3 and 4. Soon after, the engine room started rapidly filling with black smoke.

The investigation determined that the fire took place due to maintenance-related issues in the engine room of the MOL Prestige.

The transferring of cold fuel oil into a high temperature settling tank caused the water in it to boil under the surface of fuel oil, creating an overflow known as frothover. This led to the release of oil and fumes out of an opening at the top of the tank where a level indicator had been previously fitted, resulting in the fire.

Additionally, the investigation found that equipment in the engine room was not maintained as required by both company procedures and manufacturer’s specification – a responsibility shared by vessel management and crew.

The technical management of the vessel had changed the year prior to the occurrence, and a new maintenance and defect reporting system had been introduced. During this period of change, several issues that were identified by the onboard engine room crew went unaddressed by the management company, and as a result, some of the engine room equipment presented hazards.

The investigation also identified several other safety issues onboard the vessel including evacuation from the engine room, emergency preparedness and drills, maintenance of the fixed fire suppression systems and the onboard safety management system.

It was determined that if those responsible for ensuring an engine room is maintained do not work together to identify and mitigate hazards in a timely and efficient manner, there is a risk that engine room equipment will fail, leading to accidents.

Also, if companies do not establish effective safety management systems that encourage crew to identify hazards and support them in developing safe and timely mitigations, there is a risk that hazardous operating conditions will remain.

Following the occurrence, the company revised procedures for the timely implementation of the planned maintenance system in its entirety, including inspection, maintenance, and completion of tasks. In addition, the company has improved the monitoring of all hand-over reports received at the office. 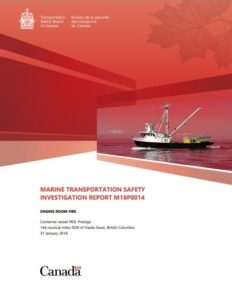