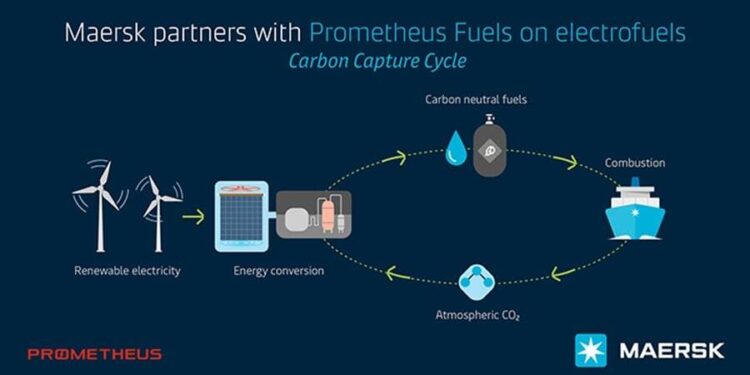 The minority investment in Prometheus Fuels, focused on developing cost-efficient, carbon-neutral eFuels, will support Maersk’s work to execute on the strategy to decarbonise marine operations.

Maersk expects several fuels to exist alongside in the future fuel mix and has identified 4 potential fuel pathways to decarbonization:

The investment supports Maersk’s efforts with electrofuels which include alcohols produced from renewable energy. Along with biodiesel, alcohols including green methanol are feasible fuel technologies already today.

Electrofuels are expected to play a key role for the decarbonisation of shipping and, if scaled successfully, Prometheus Fuels’ technology will address a key constraint for carbon based electrofuels – namely the cost competitiveness of direct air capture

Maersk also expects synthetic alcohols and other electrofuels to play a big role in the decarbonisation of shipping, due to its long-term scalability advantages compared to biobased fuels. Produced from renewable energy and water and ambient CO2 from direct air capture, it has the potential to offer infinite availability regardless of geographic scope.