by The Editorial Team
in Safety, Sustainability 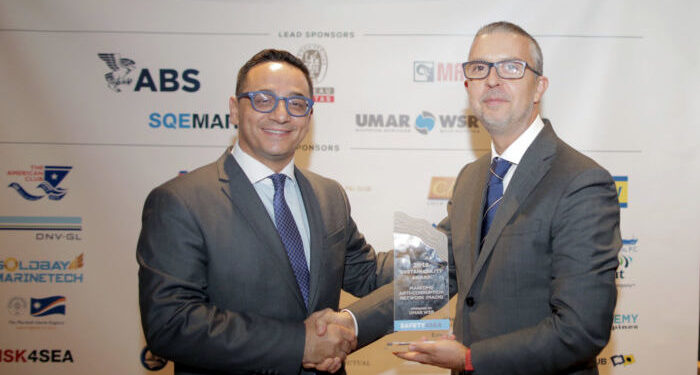 SAFETY4SEA is pleased to announce that Maritime Anti-Corruption Network (MACN) has received the 2018 SAFETY4SEA Sustainability Award at a prestigious award ceremony which successfully concluded on October the 2nd at Yacht Club of Greece in Athens, the evening ahead of the SAFETY4SEA Conference.

Maritime Anti-Corruption Network (MACN) received the SAFETY4SEA Sustainability Award, sponsored by UMAR, for working towards the vision of a maritime industry free of corruption that enables fair trade, creating a culture of integrity within the maritime community. Other short-listed nominees for this category were: Propeller Club, Sailor’s Society, Thun Tankers and WinGD (Winterthur Gas & Diesel).

Presenting the award Mr. Thrasos Tsangarides, Group CEO, UMAR, said: “The Maritime Anti-Corruption Network understands that our economic and technological growth often come at a cost. Ethical business practices are being tested and corruption is a major problem that costs trillions in bribes every year. It distorts competition, deters the free market and delays further development of social and economic growth. The answer to this centuries-old problem lies in developing corporate cultures with strong business values that understand that ethical behaviour and transparency actually add competitive advantages to organisations while enabling more trustworthy business relationships and lower costs.”

Accepting the award on behalf of MACN, Mr. Dimitris Balamatsias, DPA & HSQE Manager, Neptune Lines, stated: “Corruption is a real threat to the people who work on our ships and it damages our business and reputation. Shipping is not alone in facing this enormous problem, a problem that is too-often excused as being too hard to solve – ‘it is the way things have always been done. However, in the fight against corruption the shipping industry has shown unparalleled leadership. The Maritime Anti-Corruption Network is now over 100 members strong. We have shown that shipping companies – working together – can be more effective in fighting corruption than any regulation or press expose.”

Maritime Anti-Corruption Network (MACN) is a global business network, established in 2011. MACN vision is a maritime industry free of corruption that enables fair trade to the benefit of society at large. MACN works towards its vision through three objectives – the three C’s: Capacity Building, Collective Action and Culture of Integrity. Today, MACN counts nearly 100 members globally. The network has managed to get shipping companies to work together and say ‘no’ to corrupt practices. Currently, MACN has shed its focus on promoting a global anonymous incident reporting system for seafarers. To date, MACN has collected over 19,000 reports of corrupt demands globally. MACN is currently further developing its anti-corruption projects in the Suez Canal, Nigeria, Indonesia, and Argentina, starting also a new one in India. ‘’Regulation is vital to tackling corruption. But action must go beyond writing new or more laws’’, John Sypnowich, Chair of MACN believes.

Maritime Anti-Corruption Network (MACN) attracted the most votes by the end of the voting period which held online during a two-month period. SAFETY4SEA Awards are held annually within the scope of awarding industry’s outstanding practices for Excellence, Sustainability, Training, Technology, Initiative and Leadership. Other winners of the 2018 SAFETY4SEA Awards are: Norbulk Shipping UK Ltd for the Dry Bulk Operator Award, Arcadia Shipmanagement Co.Ltd for the Tanker Operator Award, CSMART Training Center for the Training Award, Inmarsat for the Technology Award, UK P&I Club for the Initiative Award and Capt. Panagiotis Tsakos for the Leadership Award.

Find photos from the awards ceremony at Flickr and explore more about the nomination & voting procedure and the winners of 2018 SAFETY4SEA Awards at https://events.safety4sea.com/2018-safety4sea-awards/