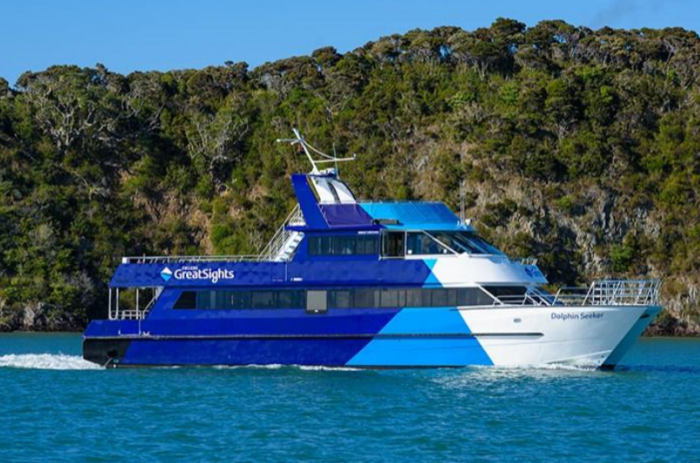 New Zealand's Transport Accident Investigation Commission released its report on the grounding of the passenger catamaran Dolphin Seeker, on 27 October 2018. The boat ran aground on rocks at slow speed. Nobody was injured, but the vessel sustained significant damage.

On the morning of 27 October 2018, the Dolphin Seeker was at its overnight berth in Ōpua. The skipper and crew went on board and prepared the vessel for the day.

A little later the Dolphin Seeker left its berth in Ōpua for Paihia, where it boarded 100 passengers. The vessel then departed Paihia for Russell, where it boarded another 30 passengers. The Dolphin Seeker then departed Russell for the morning ‘Hole in the Rock Dolphin Cruise’. The trip was completed without incident. During the trip the skipper had a radio call from another vessel, informing them that dolphins were in the region of Brampton Bank.

Passengers embarked in Paihia for the afternoon voyage. The Dolphin Seeker then went to Russell, where more passengers boarded.

The Dolphin Seeker departed Russell for its afternoon voyage, with 47 passengers on board. The skipper took the vessel directly to the area near Brampton Bank where they had found the dolphins on the morning trip. A pod of dolphins was located a few minutes later.

The skipper, who was alone in the wheelhouse, slowed the vessel and started following the pod of dolphins at a low speed of up to about 5 knots at times. At the same time the skipper began delivering the tourist commentary about the dolphins over the public address system.

Having been following the dolphins for about 15 minutes, the Dolphin Seeker entered an area of shallow water and ran aground on rocks at low speed. The skipper could not manoeuvre the vessel off the rocks. The crew made an internal inspection of the hulls and found no evidence that the vessel was taking on water.

The skipper contacted Fullers GreatSights’ management and notified them of the grounding. As there were other company vessels in the vicinity and the Dolphin Seeker appeared to be resting stably on the rocks, the skipper did not make a radio distress call. They agreed to transfer the passengers to another Fullers GreatSights vessel of a similar size to the Dolphin Seeker, the Te Maki.

The Te Maki and a smaller company vessel the Tutunui were standing by, ready to help the Dolphin Seeker. The Tutunui was used to transfer all the passengers to the Te Maki. The transfer operation was complete and the passengers disembarked at the wharf in Paihia, one hour and 40 minutes after the vessel ran aground. There were no reports of passenger or crew injury.

The incoming tide lifted the Dolphin Seeker off the rocks, whereupon it was towed back to its berth in Ōpua.

An underwater inspection showed that the grounding had caused minor damage to the hulls, but both propellers were significantly damaged.

The Transport Accident Investigation Commission discovered that the grounding took place because the skipper did not notice that the vessel had moved into shallow waters while focusing on giving a passenger commentary at the same time as manoeuvring the vessel to maintain proximity to the pod of dolphins.

The Commission also found that the skipper was working alone in a high-risk situation. There were few or no defences in place to prevent the one-person errors that led to the grounding, such as fully using the features of the vessel’s electronic navigation equipment.

The operator took safety actions to address this safety issue. Therefore no new recommendations were needed.

A key lesson arising from this inquiry is that when skippers are operating vessels alone in high-risk situations, there should be adequate measures in place to minimise the risk of one-person errors resulting in maritime accidents and incidents.

View more details in the PDF below 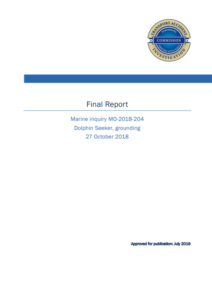