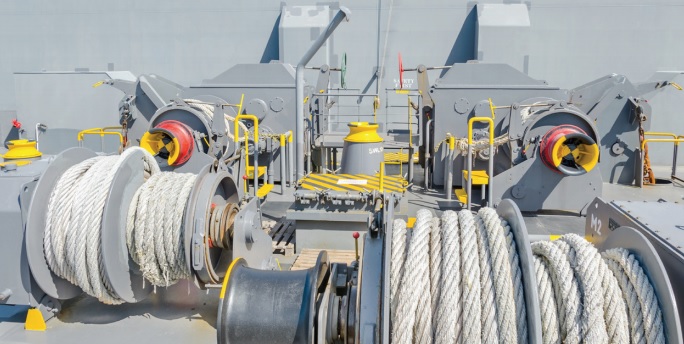 The London P&I Club continues to note the regularity with which Club-appointed inspectors record negative findings in and around the ship’s mooring station. In its latest StopLoss issue, the Club identifies that the most common finding include lack of anti-skid deck paint in key areas; lack of hazard marking of protruding objects and platforms and low awareness of the dangers of snap-back zones.

With respect to anti-skid coatings, the Club would recommend that ship’s officers conduct a risk assessment of their mooring stations to establish the best location for such areas. The Club also recommends the use of the prescribed additive to the deck paint, which can usually be found in the ship’s Coating Technical File. Good surface preparation is key to a long life as it is a widely-held belief that 70% of premature coating breakdown on ships is attributable to poor surface preparation.

Hazard markings make trip hazards more visible, and officers should also not overlook dangers at head height when conducting a risk assessment of a mooring station.

Poor awareness of snap-back zones continues to feature as a regular negative finding on Club inspections. Inspectors appointed by the Club are required to determine the awareness of ship’s crews who are involved in mooring operations as a part of the inspection questionnaire. The intention is for the inspectors to speak directly to ship’s crews when making their assessment.

The Club says it is always pleased to note occasions where the best practices section of the form records that ship’s crews are engaged in ‘toolbox’ meetings prior to operations, crew are encouraged to consider each individual mooring operation, and specifically the planned mooring arrangement, in good time.

The Club adds that  the latest (2015) edition of the Code of Safe Working Practices for Merchant Seaman makes clear reference to a particular industry-wide confusion over the area of snap-back zones being marked on the deck. The 2015 edition states: “26.3.3 – The painting of snap-back zones on mooring decks should be avoided because they may give a false sense of security.”