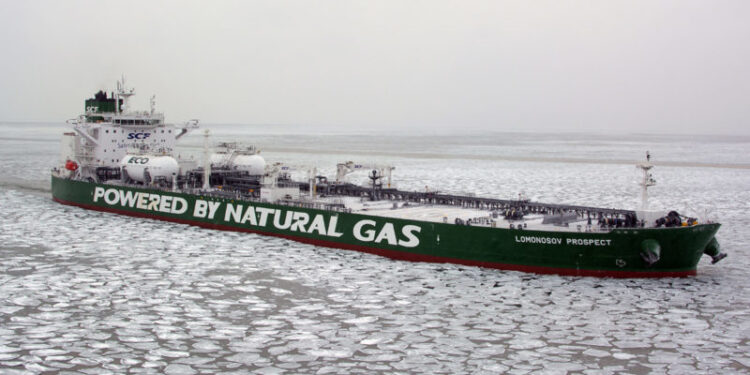 The high-latitude voyage from Cape Dezhnev at Chukotka, to Cape Zhelaniya of the Novaya Zemlya archipelago, took the Arc4 vessel 7.8 days to complete, during which the tanker covered a distance of 2,194 nautical miles. During the voyage, the crew tested the operation of the ship engines and controls of the fuel systems using LNG, as well as the operation of navigation equipment and machinery in ice conditions and sub-zero temperatures.

The tanker transited most of its 950 nautical miles without icebreaker escort, except only when traversing the most navigationally and hydrographically challenging area of the Ayon ice massif in the East Siberian Sea, where she was escorted by Atomflot’s nuclear-powered icebreaker ‘Taimyr’.

The vessel is proceeding towards her destination port at the moment.

Lomonosov Prospect is the second in the series of six Aframax tankers designed to operate on LNG as the primary fuel, delivered to the company in October 2018. The vessel has a length of 250 m, a breadth of 44 m, a deadweight of 114,000 tonnes, and is assigned an ice class Arc4.