by The Editorial Team
in Fuels, Sustainability

Above image is used for illustrational purposes only/ Credit: Shutterstock

A recently published report by the International Council on Clean Transportation (ICCT) and commissioned by the environmental lobby group Stand.earth, aimed to ‘examine the lifecycle GHG emissions from marine fuels, including a previously poorly understood source of climate emissions from LNG-powered ships– the unintentional releases of the climate super-pollutant methane from ship engines, known as methane slip.

The report claims that ships fueled by LNG do not achieve the emissions reductions as required by the IMO’s initial greenhouse gas (GHG) strategy– but also, using LNG could worsen the shipping industry’s climate impacts compared to marine gas oil (MGO) when considering the amount of heat these emissions will trap over a 20-year period.

The report shows the need for adopting policies that can reduce the broader GHG emissions of shipping instead of CO2 only, including the well-to-tank emissions of ship fuels. If we fail to include all GHGs and focus only on CO2, we might end up with a large number of ships fulfilling all efficiency requirements, but where the GHG savings are on paper only.

In fact, it was found that the most popular LNG ship engine, especially for cruise ships, emits between 70% and 82% more life-cycle greenhouse gas (GHG) emissions over the short-term compared to clean distillate fuels.

Kendra Ulrich, Senior Shipping Campaigner at Stand.earth commented that “This groundbreaking new analysis is a damning climate indictment of LNG as marine fuel. For a sector that is already one of the largest contributors of global greenhouse gas emissions, this report reveals that switching ships to LNG is worse than doing nothing. This should serve as an alarming wake-up call for the International Maritime Organization, which must act now to ensure it includes all greenhouse gas emissions in its emissions reduction strategy.”

Namely, the report informs that of the 756 LNG ships currently in use or on order, the most popular engine type, is also the worst offender with the highest rate of methane slip.

This engine is especially popular with cruise ships, and the cruise industry promotes these LNG ships as having significant climate benefits. In December, the largest cruise operator in the world, Carnival Corporation, touted its LNG program as an example of its climate leadership in an announcement about joining the “Getting to Zero Coaliton,” with the aim to have zero-emission vessels in operation by 2030.

Ulrich stressed that “while most of Carnival’s global fleet still burns one of the dirtiest fossil fuels on earth — heavy fuel oil — LNG is far from a solution to its massive climate pollution problem. We urge Carnival to stop fueling its ships with oil refinery waste and end its investments in climate-disrupting LNG ships. If Carnival wants to be an environmental leader, it must switch to the cleanest fuel available — marine gas oil — and put its investment dollars toward truly zero-emissions technologies.”

Notably, this report informs that this comes at a time when LNG is being hailed as a climate solution by many in the shipping industry.

It is said that the Intergovernmental Panel on Climate Change has warned that global GHG emissions must be nearly halved from 2017 levels by 2030 to avert the worst impacts of climate change, and methane emissions from all sources must be cut by at least 35% from 2010 levels by 2050.

Given this short time-frame, the authors evaluated the climate impacts of marine fuels using 20-year and 100-year global warming potentials.

Methane emissions are particularly problematic because methane traps 86 times more heat than the same amount of carbon over a 20-year period.

Responding to the report, SEA-LNG and SGMF note that the ICCT findings are based on analysis of the 20-year global warming potential (GWP20) data, rather than the more commonly used 100-year (GWP100) metric.

Whilst there are many metrics available to quantify climate change that are discussed by scientists GWP100 is considered the best practice and default metric, in part because it is compulsory for UNFCC national GHG inventory reporting

They also add that the balance of LNG shipping numbers quoted in the study are ‘heavily biased towards coastal vessels. Aside from existing LNG carriers, they do not include many deep-sea ocean vessels powered by large slow-speed two-stroke engines, and it is these vessels that make up most of the global fleet tonnage and offer the greatest potential for reductions in GHG emissions through the use of LNG as a marine fuel.’

Therefore, SEA-LNG and SGMF explain that they stand by the results of the Thinkstep study published in April 2019.

To explore more about the ICCT report, you can click on the PDF bellow. 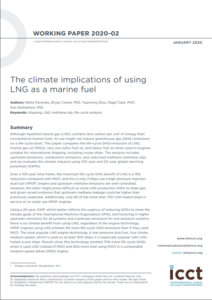