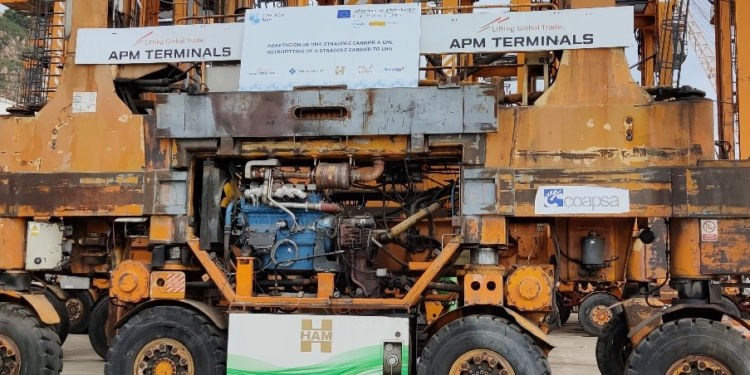 Port of Barcelona, APM Terminals Barcelona, HAM and Naturgy successfully concluded a pilot to test the viability of natural gas as a fuel in port equipment.

In a project co-financed by the European Union, the Port of Barcelona, APM Terminals Barcelona, HAM and Naturgy recently concluded a pilot which tested the viability of using natural gas as a fuel in port equipment.

For the project, an APM Terminals Barcelona straddle carrier was converted to natural gas. The results were positive, with a certified reductions in greenhouse gas emissions, specifically CO and CO2, compared to diesel-powered machines.

On the test bench, fuel consumption reduced by 11%, which could provide an economic boost for the transformation or purchase of new gas-powered machines. Total hydrocarbon emissions were also reduced through the use of natural gas, according to tests carried out with APM Terminals Barcelona’s straddle carrier. To achieve a reduction in nitrogen oxides, the tests concluded that the installation of catalytic converters is required.

The project to upgrade the straddle carrier to natural gas began in January 2016. With a budget of 1.22 million euros, it is part of the Core LNGas hive project, coordinated by Enagás. 42 partners are  participating in 14 studies and 11 pilot projects. The Core LNGas hive project has an overall budget of 33.3 million euros and is 50% co-financed by the European Union’s CEF programme.

For the straddle carrier adaption project, Idiada, a leading Catalan multinational in the sector of engineering and homologation for the automotive sector, was responsible for modifying the diesel engine for use with natural gas. This involved machining the cylinder head and cylinders, installing gas injectors and changing electronics and engine sensors.

APM Terminals Barcelona, was in charge of the assembly and commissioning of the converted straddle carrier. The main challenge for the pilot was to ensure that it didn’t disturb ongoing operations at the terminal and did not increase safety risks for port workers.

The terminal carried out a number of risk studies to determine the feasibility of using natural gas and the implmentation of safety measures, such as maintaining a distance of 25 metres during LNG refuelling. The machine was able operate within the terminal’s normal operations, with similar autonomy to diesel.