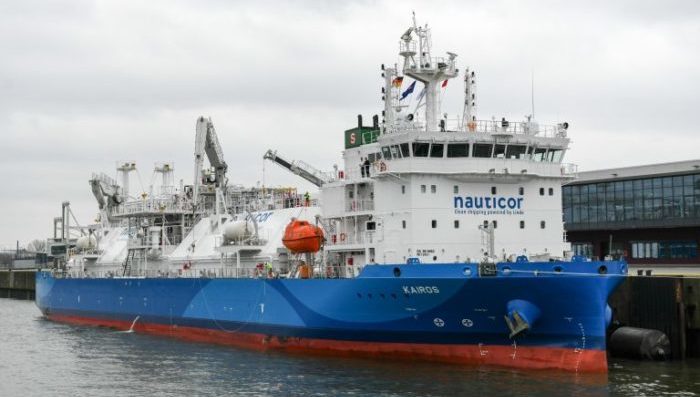 The LNG bunker supply vessel Kairos, operated by Nauticor, carried out the first LNG bunkering operation in the port of Södertälje, Sweden, where it delivered 150 tons of LNG. The operation occurred on September 12 at Södertälje’s oil terminal.

The operation took place with the product tanker Ternsund, chartered by the Finnish fuel supply company NEOT (North European Oil Trade), and marked the first LNG bunker operation in the port of Södertälje, and in the Baltic Sea, during which normal cargo was unloaded in at the same time (SIMOPS).

Commenting on the development, Sonja Neßhöver, Director LNG Portfolio at Nauticor, said that this operation is an important milestone for the development of the LNG supply infrastructure.

It also forms part of a contract signed between Nauticor and NEOT, regarding LNG supply By ship to NEOT’s fleet of time-chartered product tankers, which operate on the environmentally friendly fuel.

Kairos is the world’s largest LNG bunker supply vessel, and was named in in Hamburg, Germany, on February 8, 2019. It is owned by Babcock Schulte Energy (BSE) and chartered by Nauticor.