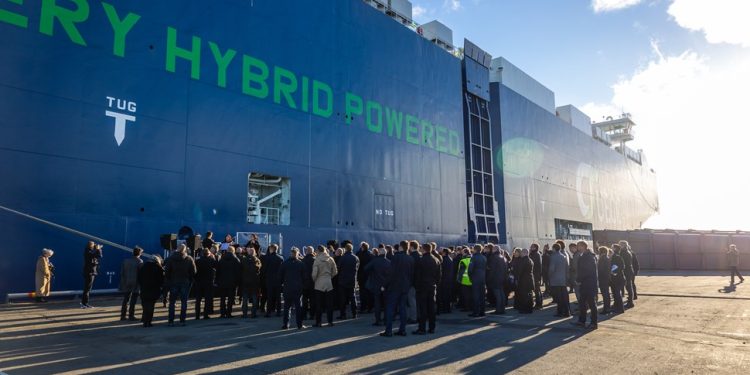 The short sea shipping line UECC started a new service to the Port of Gothenburg in April, in the light of new contracts with some major European vehicle manufacturers.

Now UECC has put a completely new ship into the service, and the ship was ceremonially christened at the Port of Gothenburg. The vessel, now named Auto Achieve, is an approximately 170 meter long vessel with the capacity to transport 3,600 cars on ten decks, as well as other types of heavier vehicles and project cargo.

said UECC CEO Glenn Edvardsen as the last in this series of vessels was launched from Jiangnan in China Shipyard earlier this autumn.

According to UECC, Auto Achieve enables a carbon dioxide emissions reduction of around 25%, SOx and particulate matter by 90% and NOx by 85% from the use of LNG. She is also adaptable for low-carbon fuels such as bio-LNG and synthetic fuels as these become available.