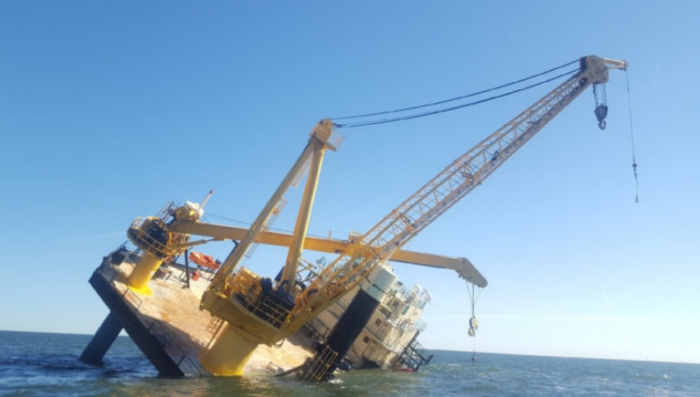 Liftboat overturns due to inadequate information about seafloor composition

The US National Transportation Safety Board published its report on the liftboat Ram XVIII, that overturned in the Gulf of Mexico, on November 18. Due to the incident, three personnel suffered minor injuries, while about 1,000 gallons of hydraulic oil were released. The vessel was declared a constructive total loss at an estimated $1,140,000.

The Ram XVIII started from Houma, Louisiana, on Friday, November 16, after taking on a Fugro Chance surveyor and survey equipment, to service the WD-68-U platform. The vessel was carrying 190 tons cargo, and the voyage lasted 2.5 hours.

Upon arrival, the liftboat received permission from the platform to approach. They would conduct work on the east side, with the bow to the platform. The master stated the plan was to establish the starboard leg in a can hole, close to where two previous vessels had jacked, and according to the surveyor’s data, the Ram XVIII was positioned with both the starboard and aft legs in cans.

The surveyor used sonar equipment to survey the bottom and confirmed the location of the can holes. Before landing on the seabed, the surveyor provided a picture of 'a clean bottom with no trash' and the he verified the position of each leg using a Fugro satellite positioning reference system. He then went ashore by crew boat with his equipment.

Of the 190 tons carried on board, the Ram XVIII had around 25 tons sitting on deck on arrival, including a compressor, grocery boxes, and sandblasting equipment. The mate loaded 400 tons of water in the preload tanks, filling them to the top.

While jacking up the Ram XVIII, the starboard and stern legs penetrated the seabed, showing they were in the can holes as planned. The master worked for about two hours, keeping the vessel level while elevating it out of the water.

As expected, the port leg did not penetrate very far, despite the master’s effort to 'lean' the ship in that direction by jacking the starboard side to put more weight on the port leg. The mate relieved the master and continued to 'tweak' the legs.

The master then continued, until he let the ship settle. Satisfied that the legs were no longer moving, the master began dumping pre-load tank water on Saturday morning. He then stripped the tanks to prevent any free surface effect.

The mate told investigators there was a 15- foot difference in the height of the port leg and the other two legs after the pre-load and estimated the port leg had only penetrated 12 to 18 inches. Aries’ management stated this 15-foot difference was not unusual.

On Saturday morning, after a safety meeting, the mate jacked the liftboat up to a 50- foot air gap to commence work. The crew worked throughout the day, cleaning, painting, and moving equipment by crane. The next morning, NTSB informs that the master was at his desk when he noticed a door swing open and the tilt alarm sound.

The inclinometer read 3-degrees to port when he reached the console. The master started the engines and engaged hydraulic power to level the vessel. He tried to jack the vessel to a level position but could not keep up with the rising port list.

The master notified nearby vessels on a VHF working frequency and made a mayday call on Channel 16, and the crew woke up. Egress was hampered by the list, toilet water on deck, and darkness when the vessel lost power.

Two crewmembers got trapped in their staterooms and had to be extricated using an axe. Investigators reviewed the Coast Guard’s recording of radio traffic on Channel 16, which included the master’s mayday call, in which a tilt alarm was heard in the background.

During the call, the master reported that the vessel 'fell over' and that he had fifteen people on board. In addition, both generators failed about the time the port gunwale reached deck-edge immersion. The port generator room flooded through a vent, and the master recalled the starboard engine suffering 'unbelievable' vibration before shutting down. The master also recalled that the port side door to the superstructure was open because of frequent use.

The master accounted for everyone, and the crew tried to launch a life float but were obstructed by swells, which swept the life float back to the boat. After the sea painter got trapped in the stern leg, the master decided to stay with the liftboat as long as possible. He and the crew waited rescue on the starboard side of the bridge, the highest point, with the emergency position-indicating radio beacon (EPIRB).

All crewmembers and offshore workers were retrieved from the stern by the 53-meter long crew boat Starfleet Guardian or by Coast Guard Station Grand Isle’s small boat. Two offshore workers on the liftboat suffered minor injuries and were transported to a hospital. A Ram XVIII able seaman suffered bruises to his shoulder, elbow, and hip.

Attempts to salvage the vessel started immediately, but further salvage of the vessel was hampered by winter weather, and the liftboat further inclined on November 24. Salvors completed the recovery of 12,300 gallons of diesel from two integral fuel tanks by December 12.

The hull was later towed further offshore and scuttled in West Delta block 96, where it would not affect subsea pipelines or other structures, until a weather window would allow salvage. The Ram XVIII has yet to be salvaged.

After conducting an investigation into the incident, the National Transportation Safety Board determined that the probable cause of the overturning of the elevated liftboat Ram XVIII was the industry practice of not regularly providing liftboat operators with adequate information about the seafloor composition. This:

You may see further details into the accident, in the PDF below 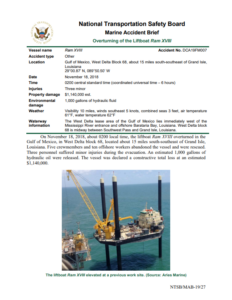