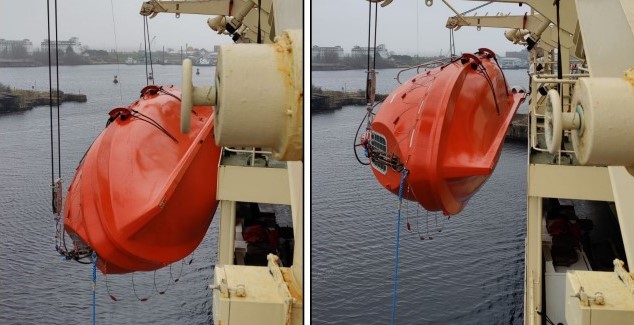 USCG published a safety alert addressing the importance of visually inspecting lifeboat and davit installations prior to testing with crewmembers on board, and ensuring crew familiarity with company policy related to lifesaving equipment testing.

As USCG said, the remote control wire may be overlooked, yet weaknesses within the linkages or poor spooling of the wire itself can lead to catastrophic failures in the lifeboat launching systems.

An internal company investigation of these incidents identified the crew did not follow existing company policy which required a test lowering without crew prior to embarking crew.

While a test lowering may not have prevented these incidents, it would have provided an opportunity for identification of the poor spooling and prompted corrective action without risk to crew.

USCG strongly recommends that ship’s crew conduct a thorough visual inspection of lifeboat launching systems and test lowering prior to operation with crew on board, paying special attention to the following inspection points: