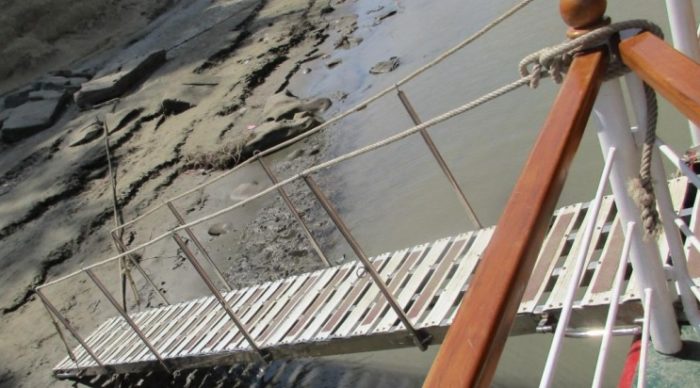 Above image is used for illustration purposes only / Credit: Shipowners Club

In the latest edition of its Safety Flashes, IMCA presents a near miss incident where a vessel gangway moved in an unplanned way and could have been lost overboard. The incident highlighted how a routine task can turn into a near miss.

The incident occurred when the starboard gangway was under maintenance; the upper part of the turning platform had been removed earlier for maintenance.

As a result, the gangway ladder was not connected to the turning platform. The ladder was secured with bolts.

In order to repair a corroded part of the fixed gangway platform, a welder secured the forward part of the gangway with rope.

Then he loosened the securing bolts and gave a little slack on the gangway wire.

At that moment, the forward rope slipped off and the forward tip of gangway fell 2-3m from where it was secured.

The gangway wire and securing ropes on the aft part prevented the gangway from further falling over to the side.

Other crew immediately brought chain blocks and other equipment to secure and recover gangway ladder back in to the place.

What ought to have been simple, straightforward and safe maintenance turned into a near miss.

Two crew members were busy with the task and neither of them thought that anything could go wrong.

The incident was attributed to human error and specifically:

Things can go wrong with the most straightforward and ‘routine’ jobs, IMCA notes.

Reiterate the importance of safety awareness at the highest level with each and every job. Complacency is to be guarded against.