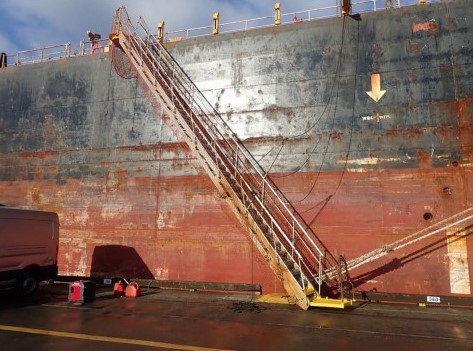 In its most recent good catch, the American Club provides lessons learned from an incident involving a steep accommodation ladder.

One of the oilers was departing the vessel after completing his 8-month long contract. It had taken him longer than he expected to get cleaned up, gather the necessary paperwork, and get packed. The vessel’s agent had made arrangements for transportation to take him to the airport and the driver was getting impatient. The oiler had hurried along the main deck to the top of the gangway with his heavy backpack and carrying his suitcase. As he was about halfway down the accommodation ladder, his suitcase banged against one of the stanchions and tripped him. He lost his balance, fell hard, and tumbled down the accommodation ladder before coming to a halt near the bottom.

The mate on watch later said that he was aware that the accommodation ladder was steep and had been up and down it himself to read the draft marks. However, he was not aware there was a maximum angle. The mariner on watch at the top of the accommodation ladder indicated that he offered to call the bosun to operate the deck crane to lower the oiler’s luggage to the dock, but the oiler had stated that he was in a hurry to depart. The bosun confirmed that they commonly use the deck crane for crew luggage as well as for transferring spares and supplies.

By carrying his suitcase, the oiler only had one hand to hold onto the railing on the accommodation ladder. By wearing a heavy backpack, he raised his center of gravity which made him more top heavy making him more prone to falling.