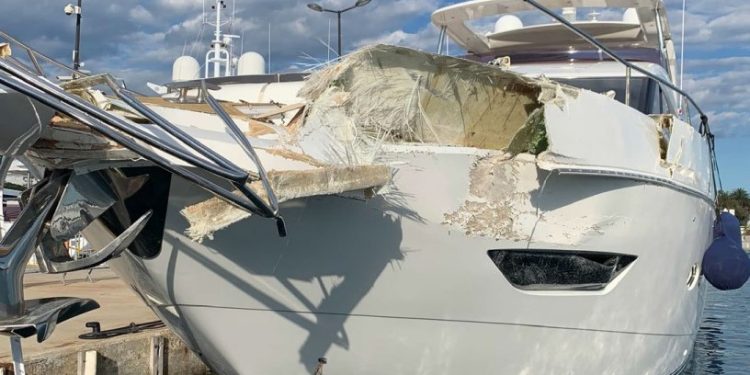 In its latest Safety Digest, UK MAIB provides lessons learned from an incident where two yachts collided at the anchorage, resulting in fatally injuring a crewman who was on the foredeck.

Two large commercially operated motor yachts (A and B) had been rafted up at an anchorage so that the guests, who all knew each other, could party together. Towards the end of the day, the crew of yacht A asked their guests to return on board so they could start heading back to their marina berth for the evening.

Once everyone was on board yacht A, the skipper went to the bridge and started the engines. On deck, the mate lifted the anchor and then stowed fenders once underway. Yacht A’s skipper opened away in preparation for a close pass by the still anchored yacht B, so the friends could wave goodbye to each other.

During the close pass manoeuvre yacht A’s skipper lost control and collided with yacht B’s bow, fatally injuring the crewman who was on the foredeck.

#1 Risk: Yacht A’s skipper intended to end a great day for the guests by delivering an exciting close pass manoeuvre. However, this was undertaken at short notice without a plan and the decision was heavily influenced by the guests’ desire to wave goodbye. The loss of control occurred due to a series of hydrodynamic effects, which would have been difficult to foresee and resulted in making yacht A momentarily difficult to steer. Although guests’ wishes can be taken into consideration, professional crews of commercially operated motor yachts must stay in control of their vessels and operate them safely.

#2 Procedure: At the time of the collision, yacht A was proceeding at over six times the local speed limit for the anchorage. In the constrained limits of harbours and anchorages, speed limits are an important safety barrier, intended to allow plenty of time for vessels to respond to developing situations. On this occasion, yacht A’s high speed and yacht B’s proximity left no margin for error, with tragic consequences.