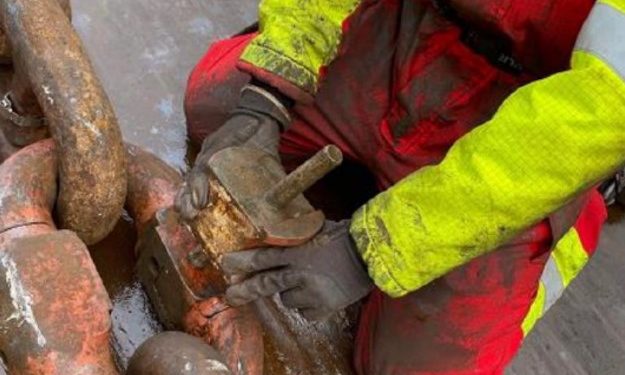 IMCA describes an incident where a seafarer suffered a serious finger injury when he got his finger trapped, and provides lessons learned.

The incident occurred when a vessel had been installing mooring elements, suction anchors and mooring chain. Whilst handling chain, the injured person got his finger squeezed when loosening a bolt (pin) from the central part of a Kenter link (Kenter heart).

He went to see the medic onboard and was treated, but was unable to do any practical work on deck the next day. When the vessel arrived back in port he was sent for X-rays, which revealed that the fingertip was fractured. He was then sent home on sick leave.

The injured person was sitting on deck hitting the Kenter heart down to drive out the pin. The pin is a conical shape, and so it must be done the correct way or else it will be driven firmer into the Kenter heart.

If this is done the correct way, the pin comes out easily. While he was hitting the heart with the pin down to a hard surface the wrong way, it didn’t loosen but slipped and his finger got squeezed/pinched between the deck/chain and Kenter heart.