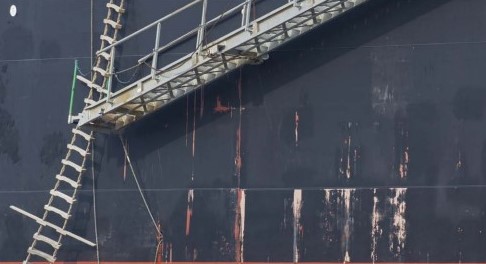 In its latest monthly safety scenario, the Swedish Club describes an accident where a pilot had fallen into the water, after one of the side ropes of the ladder broke.

It was a winter morning with calm winds and no swell. The vessel had departed port and was preparing for the pilot to disembark. The Chief Officer had told the bosun to prepare the ladder on the port side. The vessel had discharged all its cargo and was in ballast condition proceeding to the next port for loading. As the vessel had no cargo onboard the freeboard was about 7 meters.

When the bosun had secured the pilot ladder he called the Chief Officer on the radio and told him all was ready for the pilot.

A couple of days before, the safety Officer had done the monthly inspection of the safety equipment and had reported that the pilot ladder was in good, clean condition. The ladder had a four-year old certificate of conformity that was still valid.

After a couple of steps one of the side ropes broke as it was rotten and the ladder swung heavily forward and aft. This caused the pilot to lose his grip and fall. He fell five meters into the water.

At this time the vessel had a speed of about 2 knots. The Chief Officer told the Master over the radio that the pilot had fallen into the water. The Master immediately stopped the propeller pitch.

A couple of minutes later the pilot boat managed to lift the pilot onboard. He was conscious but was shocked and cold from the 6 degree water. The pilot was taken to hospital but there were no serious injuries. It is important to understand that a certificate of conformity only confirms that the ladder has been manufactured as per requirements.

It is important that pilot ladders are not tampered with, that they are inspected correctly, that tape is not used which can hide the condition of the ladder and trap moisture.

When discussing this case, the Swedish Club calls operators to consider that the actions taken at the time made sense for all involved, by asking the following questions: