The National Transport Safety Board (NTSB) issued an accident report on a fire that took place on the fishing vessel "Jeanette" which at the time of the incident was pier side at the American Samoa Government (ASG) container facility in the Port of Pago Pago, Tutuila Island, American Samoa, with 18 crewmembers and one shoreside vessel representative on board.

At about 1130 local time on December 5, 2018, one of the duties the crewmembers had to conduct was to remove wasted sections of the overhead frames on the wet deck and weld in new sections. Three crewmembers were responsible of conducting this task; two who would conduct the welding, or “hot work,” and one who would serve as the fire watch. The welders reported to the assistant engineer, and the fire watch reported to the deck boss.

Prior to beginning with the work, the crewmember assigned as fire watch conducted a walkthrough of the main deck area located above the worksite. The crewmember entered and inspected each unlocked space that would be affected by the hot work to ensure there was nothing flammable but did not enter the dry stores locker located directly above the worksite because it was locked.

The cook was responsible for unlocking the door, but the crewmember did not look for the cook, to make sure that the area was safe for the hot work. There is no indication that the crewmember informed the welders or the deck boss that he could not access the dry stores locker. The deck boss, the assistant engineer, and the welders did not conduct their own inspection of the areas above the worksite.

Following, when the crewmembers took their break for thirty minutes, the fire watch left the area of the hot work, with no one relieving him. After the break, the crewmembers returned to the wet deck and continued to replace wasted overhead beams. The fire watchstander inspected the main deck two or three times prior to lunch.

Therefore, the vessel's deck began flooding, while the vessel was slightly listing to the port side.

In efforts to improve the situation, the crew members, along with the help of others at the port, used the vessel’s pumps, as well as portable pumps to remove the water. A second fire team from the shoreside fire department entered the vessel and was able to extinguish the fire located in the dry stores locker, but the fire team had to exit the space due to low air alarms on their SCBAs.

The crew and the local shoreside fire department attempted to extinguish the fire, but with the fire worsening and the vessel’s load of fuel, lube oil, and ammonia deemed a hazard to the port, the port authority ordered the vessel to be towed offshore. While under tow and still on fire, the vessel sank about 15 miles south of the island at 1039 on December 6. The estimated property damage exceeded $15 million.

Following the investigation of the accident, investigators resulted to several issues that played a role into contributing the fire. As such:

While the designated fire watch conducted an inspection of the compartments located above the hot work area before welding, he only entered spaces that were unlocked. He did not enter the locked dry stores space, which contained the combustible materialsthat eventually ignited and caused the fire. If the vessel owner had provided the crew with a policy or formal training for conducting hot work, the crew likely would have been more aware of their responsibility to properly prepare and monitor the spaces adjacent to the location of hot work.

a) Inadequate crew training and oversight by the company to ensure safe hot work practices were followed on board the vessel.

b) Contributing to the spread and growth of the fire was the lack of a clearly designated person in charge during the response.

Before conducting hot work, it is critical to evaluate work areas for fire hazards to ensure that adequate protection is in place. In addition, crewmembers involved in hot work should be trained to identify possible hazards and take action to remove or mitigate these potential risks to the vessel and crew. The fire watch should not perform any other duties while acting as fire watch and should remain on-site until the area is deemed to be safe, unless relieved by another crewmember

To explore more on the accident report click herebelow 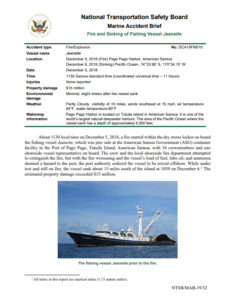