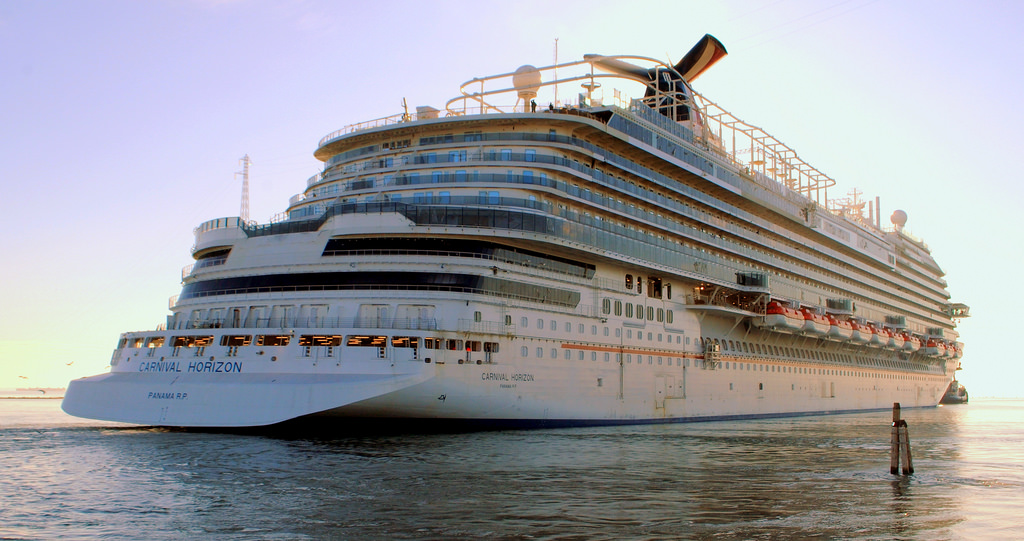 The National Transportation Safety Board issued an accident report concerning the cruise ship "Carnival Horizon", which in attempts to maneuvre its entrance into berth no. 2 at Manhattan Cruise Terminal’s Pier 88 in New York City, New York, its bow struck the southwest corner of adjacent Pier 90.

There was no pollution reported; Yet, Pier 90’s walkway, roof parking garage, and facilities suffered extensive structural damage, and the ship sustained minor damage above the waterline, totaling about $2.5 million in cumulative damage.

The Carnival Horizon was returning to Manhattan from an 8-night Eastern Caribbean cruise, and at 0318 on the morning of the accident, the ship arrived at the entrance to New York harbor. There, a pilot from the Sandy Hook Pilots association boarded the Carnival Horizon for the inbound transit to the Manhattan Cruise Terminal.

About 0329, after a master/pilot exchange about the ship and the inbound transit, the Sandy Hook pilot assumed navigational control, also known as the conn, of the Carnival Horizon. The master remained on the bridge, with overall responsibility for the safe navigation of the vessel for the duration of the arrival in port.

Although hiring an assist tugboat and a docking pilot to berth the vessel was not mandatory, the Carnival Horizon master had previously brought the ship to the Manhattan Cruise Terminal and had on occasion chosen this option when faced with strong ebb and flood currents at the pier. As a result, the scheduled 6,000 horsepower (hp) assist tractor tugboat JRT Moran, with a docking pilot from Metro Pilots on board, awaited the Carnival Horizon.

When the seafarers where reducing the distance between the cruise ship and the pier, the rate of turn to starboard led the vessel to head really close to the pier, with the third officer reporting that they were “getting really close,” to which the pilot immediately responded with a request to “back; go back.”

Yet, the Carnival Horizon’s bow struck the second and third levels of Pier 90’s facility and parking garage.

With the pilot continuing at the conn, the docking maneuver was completed without further incident, with all mooring lines secured and the vessel starboard side alongside Pier 88 at 0618.

No one was injured in the accident nor did any pollution occur.

NTSB reports that post-accident alcohol and drug testing was conducted on relevant crewmembers of the Carnival Horizon, the two pilots, and the JRT Moran crew as required. All results were negative. 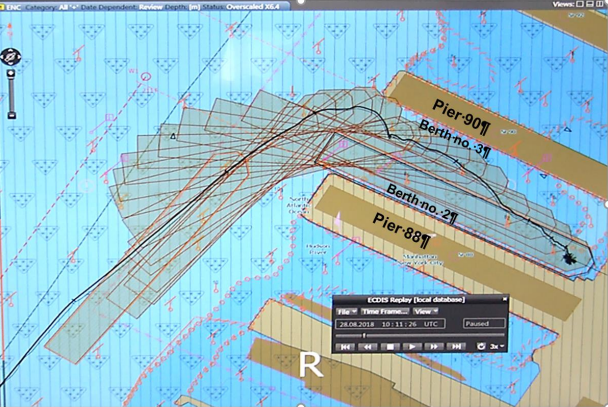 Screenshot from the Carnival Horizon’s ECDIS, showing the vessel’s track beginning at 0539 and
ending at 0611. / Credit: NTSB

The National Transportation Safety Board determines that the probable cause of the Carnival Horizon’s contact with Pier 90 was the ineffective interaction and communication between the master and the docking pilot who were maneuvering the vessel, and the bridge team’s ineffective oversight of the docking maneuver.

Contributing was the placement of the third officer in a location without view of the bow to monitor the close approach to Pier 90.

To explore more on the report click on the PDF herebelow 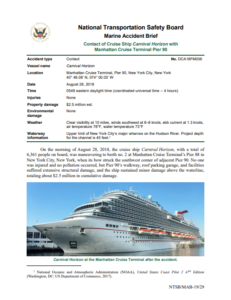