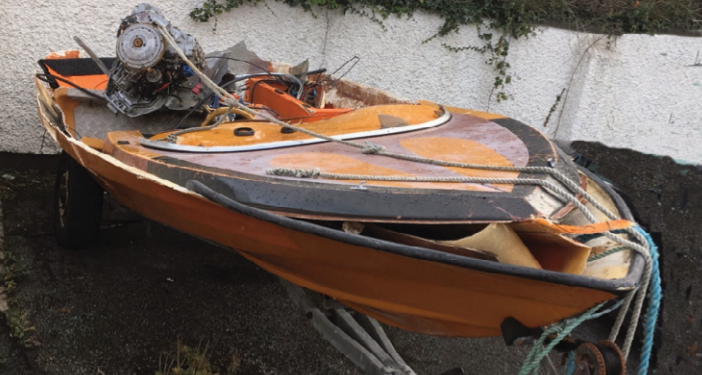 Remains of the vessel / Credit: MCIB

Ireland's Marine Casualty Investigation Board (MCIB) issued an investigation report on a fatal incident involving a recreational powerboat off the Coonanna Pier in Co. Kerry, in September 2018. The report highlighted issues related to insufficient planning, lack of basic safety equipment and consumption of alcohol.

On the 30th September 2018 at approximately 08.30 hrs a recreational powerboat departed from Coonanna Pier in Co. Kerry with three persons on board.

The vessel sailed out of the harbour and proceeded westwards to fish with rods in Dingle Bay.

At 11.00 hrs crew member No.1 received a mobile phone call from his wife. He told her that the water was “no good, not stable” and that he wanted to come back.

His wife called him again at 14.30 hrs but there was no reply.

At approximately 18.00 hrs a member of the public saw the bow of a boat at the entrance to Coonanna Harbour and shortly afterwards observed a person in the water closer to the pier.

The person informed the Coast Guard which tasked a SAR helicopter and the Valentia Lifeboat. The helicopter recovered three bodies from the water.

The remains of the boat were recovered the next day.

There are four main factors which likely combined to cause this incident:

The crew wore buoyancy vests which are sleeveless jackets without a collar. Unlike a lifejacket which completely supports the body and keeps the head back and out of the water a buoyancy vest only provides limited support.

When the boat was sighted at 18.00 hrs it was stern underwater and bow pointing upwards. This indicates that the boat was swamped from astern so the cockpit rapidly filled with water and tipped the crew into the sea. The air trapped in the bow of the boat, along with the internal foam buoyancy, kept the boat afloat with stern down due to the weight of the two outboard engines. This may have occurred at the west side of the entrance before 14.30 hrs. The crew and boat drifted in and across the harbour to the position in which they were sighted at 18.00 hrs.

Tests undertaken by the State Laboratory for the autopsies indicated concentrations of blood ethanol at 148mg% for the Skipper, zero for Crewmember No. 1 and 191mg% for Crewmember No. 2. Under the terms of the Road Traffic (Amendment) Act, 2018 a concentration of blood ethanol at 51 mg to 80 mg per 100 ml of blood incurs a penalty of automatic disqualification for fully licenced drivers. 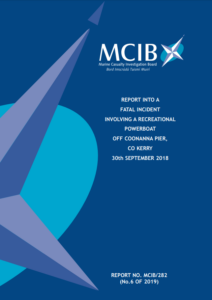