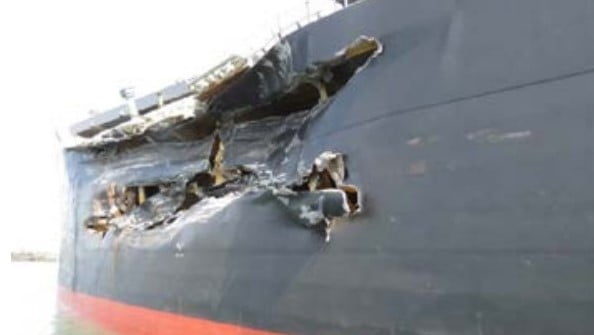 The American Club reports an incident of poor anchor watchkeeping, that led to two vessels collision, and provides lessons learned.

A general cargo vessel was anchored at night in a busy anchorage waiting for a bunker barge that was due to arrive the following morning.

The vessel’s main engine was in standby and the anchor watch was set. The Master left orders to be called if the anchor began to drag. With several other vessels nearby, the Third Mate on watch set an anchor circle on the electronic chart display and information system (ECDIS) that would set off an alarm if the vessel moved beyond the limit of the circle. No fixes were taken, but the ECDIS was monitored regularly.

The Second Mate came on watch shortly before 0400, and noted and recorded the vessel’s position. He thought the vessel might have moved from where they had been initially anchored, but was not overly concerned. At 0430, the lookout reported that the vessel appeared to be getting close to another vessel.

The Second Mate checked the ECDIS and realized that the anchor must be dragging. He notified the Master and ordered the engine room to start the main engine as soon as possible. However, before the engines could be started, the vessel collided with another anchored vessel.

The investigation recognized that the anchor circle alarm had been improperly set at too great a distance.

Additionally, the Second Mate was not sufficiently familiar with the ECDIS system to verify that the alarm was properly set.

Lastly, neither mate on watch had determined the vessel’s position and both mates had also failed to recognize the increase in tidal current that had caused the anchor to drag.

The damage to the two vessels exceeded $1.25 million and each was out of service over a month. Fortunately, all of the damage was above the waterline.

The damage could have been significantly worse had either or both of the hulls been damaged below the waterline. Further, there could have been extensive environmental damage in addition if the bunker tanks on either vessel had been breached.