Lessons Learned: If working at height is necessary, use the equipment needed

The UK MAIB, in its recently published Safety Digest, focuses on a freight ro-ro vessel entering a port; Due to concerns of cold weather and disruptions to the vessel's water pipe system, the master ordered to rig a temporary curtain arrangement in the corridor, at deckhead height, leading to the injury of a seafarer who used a ladder improperly, which led to the ladder slipping.

Specifically, as the roro vessel was entering the port, the master feared that the cold weather would seriously impact the water pipe system, an incident that had happened in the past in the sister vessel. The latter had faced problems with its frozen water pipes in the port side corridor, known as the ‘the wind tunnel’. The corridor was exposed to the elements at its forward end, and the relative wind caused by the vessel’s movement created a strong local wind effect.

Moreover, the master along with the chief engineer further discussed the issue and made the decision to rig a temporary curtain arrangement in the corridor, in order to protect the pipework. The master then ordered the bosun to establish a curtain, which would be hung at an opening in one of the frames, in the port side corridor reducing the wind effect.

The curtain establishment was to be in position in 3 weeks' time, when the colder weather was close. Following the orders, the bosun placed the curtains and instructed the duty AB and the day-work AB to help him rig it.

The curtain had to be fitted at deckhead height, a distance of 3.5m. The bosun had already placed a ladder in position; at 5.4m length, it had a pitch angle of approximately 38º (Figure 1). 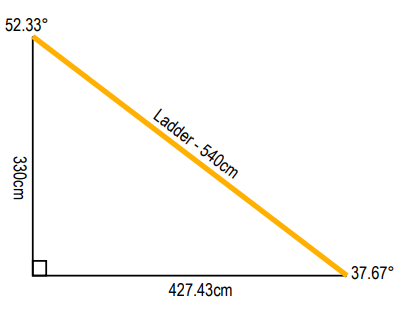 Diagram showing the height of the ladder and the pitch angle / Credit: UK MAIB

The duty AB was footing the ladder, the bosun climbed to the top of it and asked the day-work AB to pass him the dowel that he had already cut to size. Yet, the dowel was too short. After lunch, the afternoon duty AB made up the team with the bosun and day-work AB.

Following, when the duty AB saw the ladder arrangement he though of it being a little "dodgy" but didn't say something because he was new onboard. Yet, he tied a small gauge rope around the ladder, securing it to the rail on one side approximately a third along its length. 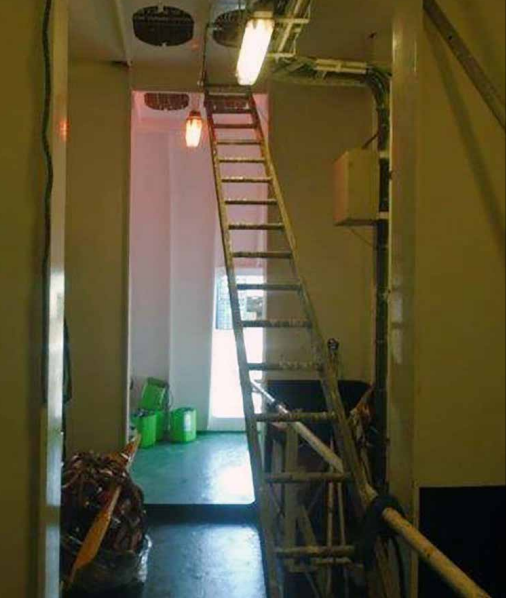 He then measured the length required at the deck height, marking the dowel with a pen. The bosun then asked the day-work AB to fetch a saw. The duty AB was growing uneasy with the ladder arrangement as he struggled to maintain a decent footing. He asked the bosun to come down, but the bosun reassured him that all was well.

A bit later, the ladder slipped, out of the blue, twisted and threw the bosun to the deck. Consequently, the bosun landed on the opening's raised coaming and after receiving first aid onboard, he was airlifted to a hospital.

Because of the falling, the bosun suffered fractures to his shoulder and hip and had a small brain bleed. The bosun remained in hospital for 5 days before being discharged home.