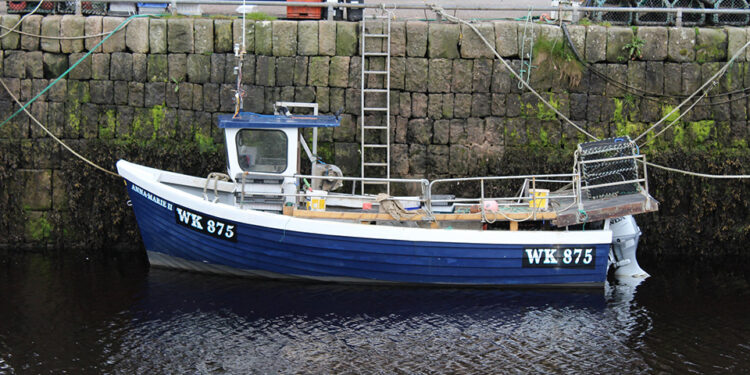 On the occasion of the investigation release of the capsizing of the fishing vessel Anna-Marie II, UK MAIB issued a safety flyer to the fishing industry about staying alert to the risk of capsize and inverting, particularly in steep waves, and the importance of wearing a personal flotation device.

At about 1550 on 23 September 2019, the 6.2m fishing vessel, Anna-Marie II capsized as it entered the mouth of the Brora river while returning from its creel fishing grounds. The vessel broached and was slewed to starboard as the skipper lost steerage, and it was capsized and inverted due to the size and steepness of the next wave.

The skipper and crewman were briefly trapped under the hull before surfacing. It is likely the skipper struck his head during the capsize, which might have affected his ability to swim. The crewman managed to swim ashore.

The alarm was raised by two passers-by at Brora harbour and a local skipper was able, after calling a “Mayday”, to head out to the scene of the capsize and he recovered Anna-Marie II’s skipper within minutes of the alarm being raised.

He commenced CPR while helming his own vessel back into the harbour. An ambulance and coastguard rescue helicopter were on scene quickly and Anna-Marie II’s skipper was flown to hospital, where he was declared deceased. The cause of death was determined as drowning.

The MAIB investigation found that:

1. In open fishing vessels the risk of capsize and inverting, particularly in steep waves, is higher compared with decked vessels. Therefore, it is important that fishermen reduce the risk of broaching and capsize by conducting a thorough assessment to ensure they are prepared if a capsize occurs. Potential mitigation measures prior to crossing a river bar could include:

2. UK MCA introduced the mandatory wearing of PFDs because of the significant number of fishermen who have drowned following fishing vessel accidents. The potential benefits of wearing a PFD far outweigh the risks of secondary issues, such as entrapment. Wearing a lifejacket will help ensure that: