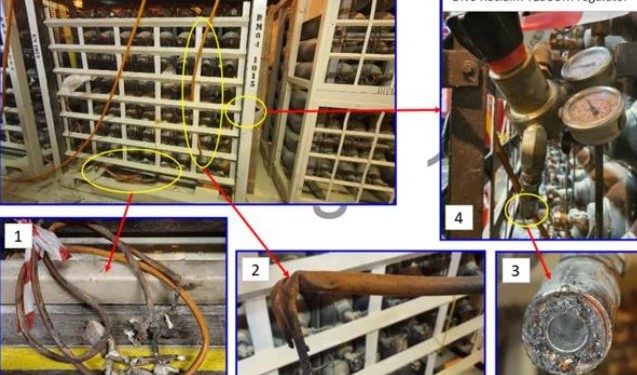 In its safety flashes, IMCA informs about an incident where an oxygen hose burst followed by an explosion and flash fire at the reclaimed Oxygen hose line.

There was a flash fire on an Oxygen hose line onboard a DSV.  The incident occurred during routine checks, when an LST (Life Support Technician) reported that the Oxygen supply pressure to dive control was low (25 Bar).

SAT control informed Dive Control and agreed that a new Oxygen supply was required. The LST went to the appropriate quad (on the main deck), and started by closing the row of eight bottles of Oxygen before opening a new row.

Whilst opening the new row of Oxygen supply bottles the LST heard an unfamiliar noise (a flapping sound from the regulator) and immediately closed the cylinder pillar valve and closed the valve on both regulators (SAT control and reclaim regulator valve) and quickly moved away from the Oxygen quad.

The LST immediately returned to SAT control and reported to his supervisor.

Shortly afterwards, the Oxygen hose burst followed by an explosion and flash fire at the reclaimed Oxygen hose line. The deck foreman who investigated the source of the explosion immediately extinguished the fire with a dry powder fire extinguisher.

There was no damage found on the nearby gas quads apart from the affected hose and regulator.

Investigation showed that the bullnose inlet (connection to the pillar valve) had no filter to stop rust contaminant from the cylinder going into the regulator. Small particles of rust from inside the cylinder accumulated inside the regulator causing high friction after the Oxygen release, resulting in heat and contributing to the spark, explosion and fire.