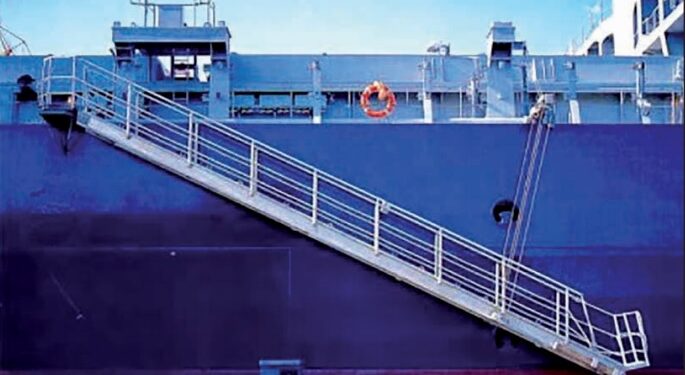 Above image is used for illustration purposes only / Credit: UK MAIB

While recovering the starboard accommodation ladder onboard a Hong Kong-flagged general cargo ship, a deck officer fell overboard from the last few steps of the ladder and was later found dead. Hong Kong MARDEP shared lessons learned from the incident.

The ship completed loading alongside a berth and was about to sail to an inner anchorage. After the river pilot boarded the vessel from the starboard accommodation ladder, the Master instructed the Third Officer (3/O) and an AB to recover the ladder.

Suddenly, the AB saw the 3/O holding onto a stanchion with both hands and his body hanging outside the ladder. The stanchion eventually came off the socket of the ladder and the 3/O fell into the water.

A search and rescue operation was then carried out by the local coast guard upon receipt of the man overboard report, but the 3/O could not be found. Two days later, the dead body of the 3/O was found in the sea.

The investigation into the accident found that: