Transport Malta’s MSIU issued an investigation report on a fatal fall of a crew member of the Maltese-registered bulk carrier ‘New Island’ in Greek waters, in December 2018. While in the cargo hold, the AB fell from a height of approximately six to seven meters onto the tank top, probably from loss of balance whilst exiting.

On 28 December 2018, New Island was at anchor, Southeast of Rodos Island, Greece, in a ballast condition, awaiting orders.

The crew were carrying out scraping and touch-up painting in cargo hold no. 3. The work was paused at around 1500 for a coffee break, at which point, the crew members started exiting the hold.

At about 1500, all crew proceeded towards the aft ladder, with the exception of AB 1, who was noticed making his way quickly to the forward access ladder.

No items were reported to be seen in his hands, while climbing the forward access ladder. AB 2 and AB 3 were out of the cargo hold, before anyone else.

While the bosun and AB 4 were still climbing up the aft access ladder, they heard a loud noise coming from the forward area of the cargo hold.

When they looked back, they both saw AB 1, lying on the tank top close to the ladder.

AB 1 had been previously noticed to have passed the first platform on his way up.

Although no one saw him fall, it was estimated that he had fallen from a height of about six to seven metres.

The alarm was raised and the injured crew member was lifted out of the cargo hold by the use of a stretcher and the vessel’s crane.

A medical evacuation was arranged while, in the meantime, the crew member was given first aid by the vessel’s crew members.

The AB was pronounced dead on arrival at the hospital.

The safety investigation concluded that, in all probability, the immediate cause of the accident was loss of balance whilst exiting the cargo hold.

Following the incident, the company identified the need to clearly mark both ends of the vertical ladder, with signs that such ladder is to be used as an emergency exit only and to be used with a safety harness. Furthermore: 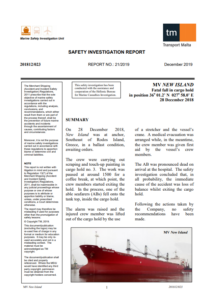