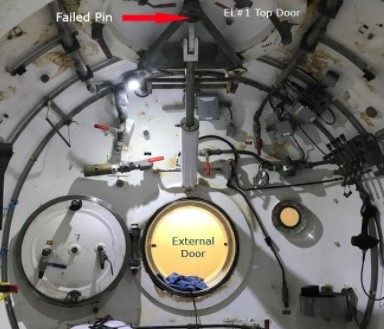 As IMCA informs, an incident took place where components of the top door mechanism had failed.

Shortly after a dive team transferred from the entry lock into the diving bell, there was a failure of the diving bell overhead door centre pin.  A “bang” was heard and it was seen that components of the top door mechanism had failed.

The bell and dive system remained safe, and there was no loss of pressure.  Following discussion with the team onboard the door was lowered in a controlled manner supported by the diver recovery hoist in conjunction with the top door hydraulic ram.

The divers were transferred to an adjacent chamber and the system made safe.

The top door hinge pin, weighing 0.5kg, fell from its position approximately 1.8m to the deck of the entry lock; there was no-one in the entry lock at the time.

This failure appears to be limited to this specific design of hinge and operating mechanism. It should be noted that the hydraulic ram did not act directly onto the pin that failed. The hydraulic ram was, however, directly attached to the door (via clevis)

IMCA also estimates that the door would have been operated between 1500 – 2000 times per year for an average diving year (200-250 days diving), and suggests that the root cause is likely to be design related, corrosion and cyclic stress fatigue cracking (applied over many years).

Doors with a similar design should be checked for cracks at the earliest opportunity.