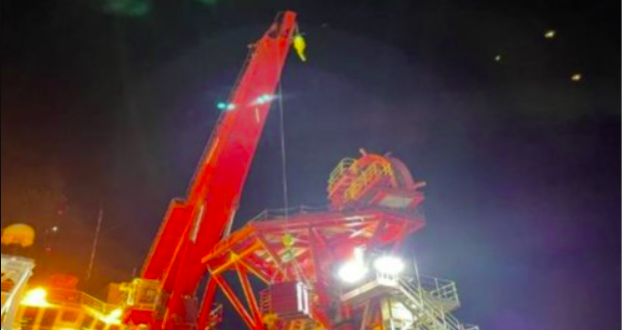 As part of its Safety Flashes, IMCA describes a fall of a part weighing 8.5kg over 15m from a pipelay tower to deck, while the tensioner pads were being changed out on a Tiltable Lay System (TLS). Investigation showed the change-out of tensioner pads was considered a routine task and did not require a designated Lift Plan.

The discarded pads were packed into two dedicated tensioner pad baskets on the TLS tower for transfer back to deck. The crane operator lifted a first basket and placed it in the landing zone on deck.

When lifting the second basket, a higher boom angle was needed in order to clear the TLS. As the basket cleared the TLS, it started swaying.

This movement was amplified after the basket hit the crane boom, causing a single tensioner pad to fall from the basket down to the main deck.

The displaced tensioner pad fell approximately 15 to 18 meters. There was no-one in the area at the time, and the area of the crane lift path had been barriered off as an exclusion zone.

-The dropped object (tensioner pad) resulted from the excessive movement of an unsecured load;

-The change-out of tensioner pads was considered a “routine lift” and did not require a designated Lift Plan (with a specific slew path identified);

-The operation took place at night and the sea conditions were not apparent to the crane operator or banksman when they started the lift;