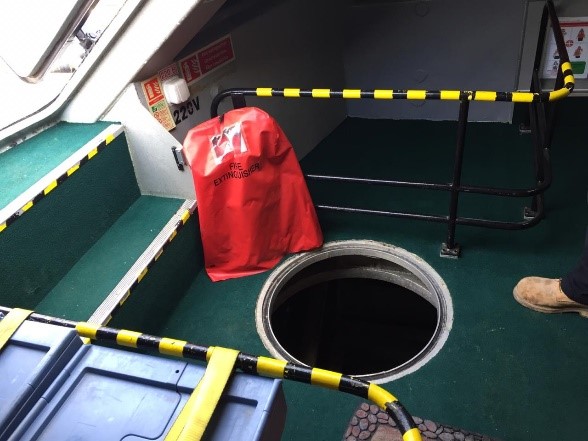 The portable fire pump was used to pump the space clear / Credit: IMCA

In its latest Safety Flashes, IMCA presented a case of water ingress which caused a crew boat to list, while in its first voyage after drydocking. IMCA noted there was no post-drydock maintenance inspection or dedicated testing to ensure that everything done in drydock was done properly.

During its first voyage after drydocking, a crew boat started to list. A bilge alarm signal was received on the bridge, informing that there was water inside starboard side void space #1.

Following this, starboard side void space #1 was checked and it was confirmed that there was water present.

At the same time, the Chief Engineer inspected the void space and observed that the main discharge non-return valve was not installed improperly, and its gasket was not properly sealed.

The other drain valve, placed between the forepeak and void space #1, was not installed at all and found lying nearby.

The automatic bilge pump, which should have started immediately after the alarm was raised, had not started.

The portable fire pump was used to pump the space clear. At this point, the vessel was listing heavily owing to some 2 cubic meters of water in the void space.

There was no post-drydock maintenance inspection or dedicated testing to ensure that everything done in drydock was done properly and completely.

The company developed a pre-sail checklist of all and any critical equipment or systems (bilge systems, fire detection systems, alarms, navigation systems, propulsion and steering systems) to be checked as being in working condition before departure.

Ensure equipment maintained, repaired or installed during drydock is physically checked and verified as working correctly.