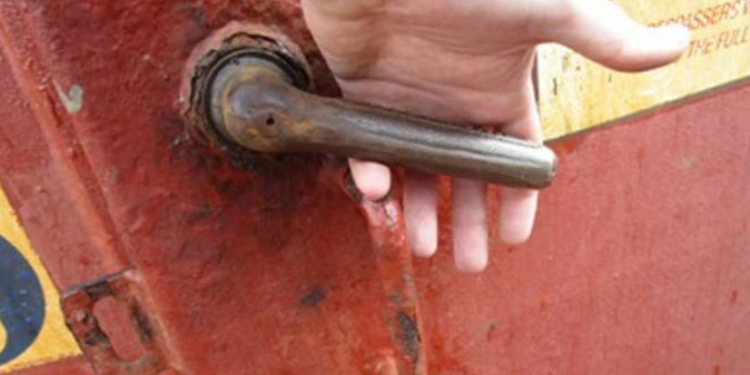 In its recently-released version of “Good Catch”, the American Club provides lessons learned from an accident where a mariner’s little finger was crushed and broken in several places.

While transiting through a standard steel watertight door with manual dogs, a mariner seriously injured his hand.

The dogs on the door had swiveling steel handles operable from both the inside and outside. The steel wedges located inside the door on the frame are designed to catch the inside dog handle when it is turned to secure the door tightly. In port, only the dog nearest the handle was secured to keep the door closed.

As the mariner exited the door onto the main deck, he closed it behind him and used the dog nearest the door’s handle to secure the door in the closed position just like he had done many times before.

However, this time when the mariner gave it a hearty twist, the inside handle rotated beyond the wedge, crushing and trapping his little finger between the dog and the handle of the door. He was unable to rotate the handle because it had gone past the end of the wedge and would not budge.

After minutes, his yelling was heard and other crewmembers responded. It took several of them and a pry bar to pull the door closed enough to rotate the handle back past the wedge and free the mariner’s finger.

However, on closer examination, it was found that the door was not being maintained and that the dogs were in need of adjustment to ensure they fit snugly against the wedges. Over time, the wedges had slowly worn down and the dogs had never been adjusted to account for that.

According to the club, the mariner’s little finger was crushed and broken in several places. He had to be signed off the ship and sent ashore for medical treatment that included surgery that saved his finger.

Even without an injury, had this happened during an emergency, the door could have been stuck closed creating confusion and necessitating alternate routes into or out of the accommodation spaces.