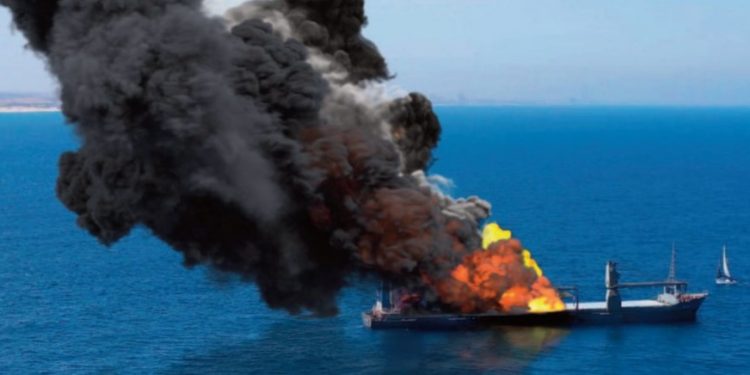 A bulker had loaded sugar beet pellets in all three cargo holds with the operation taking 27 hours. When loading was completed the ventilation hatches and all other access points to the cargo holds were secured.

In cargo hold 1 there were two metres of space between the cargo and the cargo hatch. In cargo holds 2 and 3 the cargo was almost up to the hatch coaming.

All hot spots were located adjacent to recesses in the coamings for the cargo holds’ floodlights.

The crew isolated the electrical power to the floodlights. Because of the increased temperature of the hot spots in hold 2, the Master released CO2 into the hold.

The CO2 did not extinguish the fire but reduced its severity for a while. When the vessel arrived at the discharge port the cargo hatches were opened, and flames broke out from hold 2. At the same time a plume of smoke escaped from hold 3. The top layer of cargo in hold 2 had been burned.

About 4 metres below the cargo surface the cargo was in good condition. It was discovered that the cargo in hold 3 had been damaged by condensation and tainted by smoke. There were clear burn marks around the floodlights and distinct burn marks by the coaming at the same locations where the hot spots had been discovered.

All the floodlights were installed in recesses in the hatch coaming. The floodlights were protected by round bars preventing crane hooks, grabs etc from hitting them, but these bars do not prevent cargo like sugar beet pellets from covering the lights.

The floodlights were controlled from the bridge on a panel with four key-switches. These switches were marked 1, 2, 3 and 4 respectively. No drawings or legends were attached clarifying which areas these key-switches served.