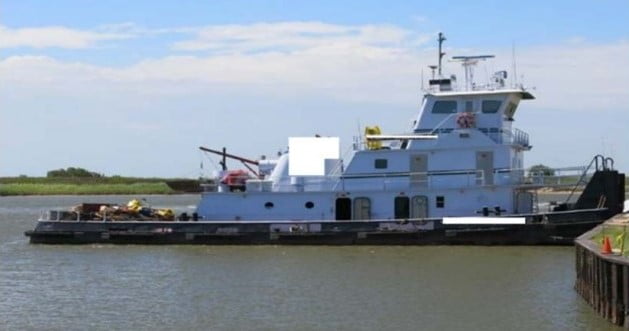 The American Club informs about an incident when the captain of an inland towing vessel, ordered his crew to stop working as a precautionary measure.

An inland towing vessel was transiting downbound on the Lower Mississippi River with a string of 6 barges.

The crew included the Master, pilot, engineer, a mate and 2 other deckhands. The two deckhands were both new and had less than 6 months of experience in the towing industry.

It had been a particularly busy day for the crew. They had dropped off and picked up several other barges and had to reconfigure the entire tow on two separate occasions.

This was unusual for this vessel as the crew was more accustomed to longer voyages without the need to frequently drop off and pickup barges.

Further, the river level was high and the current was fast. The weather was cold and it had been raining on and off all day. With two “green” deckhands onboard, both deckhands and the mate had been needed each time they dropped off or picked up a barge all while being closely monitored by the Master or pilot on watch.

The vessel was enroute to a fleeting area to drop off 3 loaded barges and pick up 3 additional loaded barges. As the pilot was in the process of relieving the Master just before midnight, the Master expressed some concern that it may not be safe to attempt to drop off and pickup more barges given the time of day and the effort the crew had made previously that day.

While he was sure the deckhands would try to rise to the occasion, he also recognized that the risks were higher than normal. Everyone was tired. It was dark. It was late at night. All the topside surfaces were wet and potentially slippery. The river current was fast. Two of the deckhands were inexperienced.

The Master contacted the office and got permission to tie up the tow at the fleeting area and wait until the following morning to drop off and pick up the barges. That allowed the deckhands to get some uninterrupted rest and a fresh start in the morning.

Informally, the Master conducted a risk assessment of the overall situation. He considered fatigue, the weather conditions, the nature of the work to be done and the experience of the crew.

His conclusion was that the risk was higher than he liked and recognized that by the following morning, several of the risks especially the fatigue would be mitigated.

He also recognized that if they attempted to drop off and pick up more barges that night and something went wrong, that “something” would likely be a serious injury or even a fatality should a deckhand fall overboard.