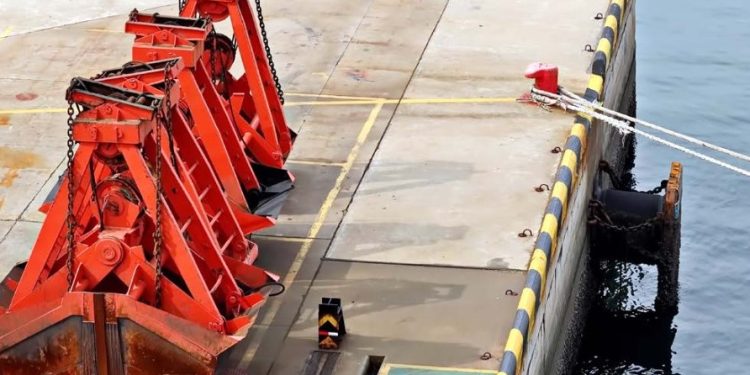 In its latest monthly safety scenario, the Swedish Club describes an incident where a cadet fell into the water along with a grab. The seafarer was diagnosed with serious injuries and internal bleeding.

The bulk carrier was alongside waiting to prepare for drydocking. For cargo operations, the vessel was fitted with cranes that were more than 4 metres tall and had grabs weighing 10 tonnes.

During the daily safety meeting the superintendent informed the crew that four grabs were to be taken ashore. The Chief Officer had carried out a risk assessment of the operation and was monitoring the operation on the vessel. The plan was to land the grabs in the open position onto a trailer on the quay.

An AB was operating the crane that was to be used to lift the grabs. On the quay were two cadets, the Third Officer, two ABs and the vessel’s superintendent. The Chief Officer had instructed the two cadets to help only if specifically needed. The ABs were instructed to remove the wires when the grab was safely secured on the trailer.

The AB operating the crane landed the grabs on the trailer in the open position with the bucket in a forward and aft direction. As soon as the grab was landed on the trailer one of the cadets climbed onto the grab to release the wires. The superintendent shouted to the cadet to get down at once.

It was observed that when the grab was on the trailer, the total height of the vehicle was about 10 metres, which was above the height restriction at the shipyard and on the roads, and so the plan had to be changed.

The decision was made to lay the bucket in the closed position with one side resting on the trailer bed. The bucket was closed and the grab was lifted and swung to stow the bucket in an athwartship direction. When the grab was landed it was secured by thick wooden planks below the bucket sides. Once the grab was stable the cadet once again climbed up on the grab to release the two hoisting wires from the crane. This was not noticed as the superintendent’s focus was elsewhere and the other ABs and cadet were working with other wires on the trailer and didn’t notice that the cadet had once again climbed up.

The cadet removed the wires from the grab. He had originally secured his safety harness to the grab but released the harness when he was climbing down. Instead, he had secured a rope to the top of the grab to assist him in climbing down. The grab appeared to be stable but was actually top heavy as it was in the closed position.

While the cadet was climbing down from the grab it suddenly shifted and fell into the water with the cadet.

The Third Officer threw a lifebuoy to the cadet in the water. He was taken to the hospital where he was diagnosed with serious injuries and internal bleeding.

When discussing operators should consider that the actions taken at the time made sense for all involve, by asking the following questions: