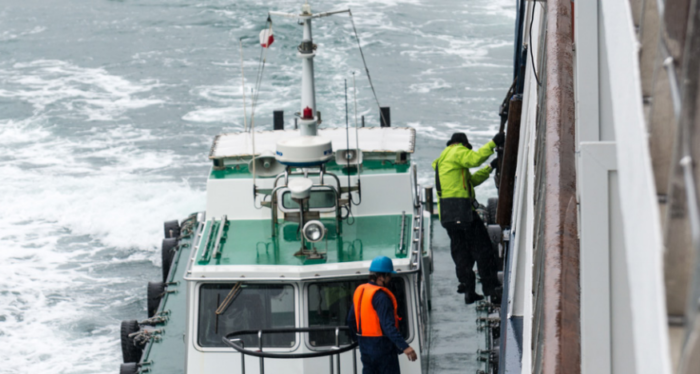 Lessons Learned: Belts and straps of inflatable lifejacket need to be tight to be effective when inflated

The Swedish Club issued its Monthly Safety Scenario focusing on a fatality that took place during work operations. The event took place when four technicians were transmitted from a bow to a tug, and had to climb the ladder. One of the technicians fell in the water and lost his life when a big wave hit the tug and he lost his balance. Despite attempts from the rest of the crew to save him, the technician seemed to be wearing his inflatable lifejacket wrong, which didn't help him move in the water.

A bulk carrier was anchored outside an Asian port during the monsoon season, in ballast state. Four technicians would board the vessel to do some repair works to the main engine. The technicians boarded a small harbour tug to go out to the vessel. It was in the early morning and still dark. The weather was overcast with moderate winds. The crew had rigged the pilot ladder.

According to the plan, the technicians were to disembark from the bow of the tug. The first one climbed up the ladder with no problems; There was a slight swell, so it was important to time the climb up correctly.

Following, the second technician grabbed the pilot latter but a big wave hit the tug; The technician lost his balance and grip and fell into the water.

In light of the incident, the AB on tug shouted 'Man Overboard' and when the master on the tug heard this he reversed away from the vessel so the technician would not be crushed. The AB used a boat hook to try and grab the technician, but the technician was too far away.

In the meantime, the AB threw a rope attached towards the technician which he manged to grab. Apparently, the technician was struggling as the life jacket was pushing his head forward as it was positioned badly and seemed to be loose.

The technician drifted towards the port side of the bulk carrier, but another wave slammed him into the bulk carrier’s hull and unfortunately the technician hit his head. Because of this he lost his grip on the lifebuoy and started to drift away with his head under water.

About five minutes later the tug finally managed to recover the technician. It was too late as he was pronounced dead when he was taken to hospital.

After the fatal incident, the Danish Authorities (DMAIB) tested the inflatable lifejackets.

According to the tests it is common that

If the lifejacket is not strapped very tightly, its buoyancy tends to flip it upwards towards the wearer’s face and neck. In water, this can cause the lifejacket to move to a position on the side or the back of the person’s head and can push the head and face into the water.