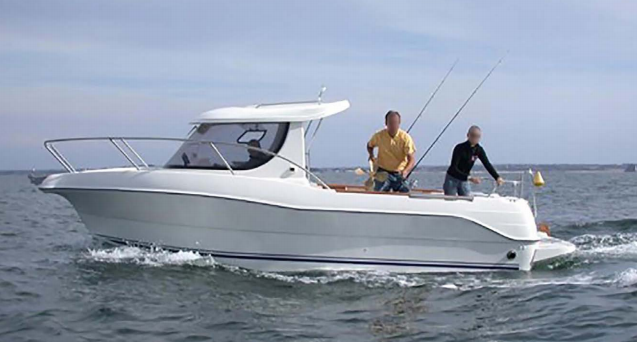 In its latest Safety Digest, UK MAIB analyzes a vessel flooding and sinking caused likely by the catastrophic failure of the engine cooling water system hose or a hull fitting. MAIB stressed that the crew were saved thanks to wearing their auto-inflating lifejackets that kept them afloat.

A small sports fishing boat manned by two crew was being used to transfer a technician from shore to a merchant ship at anchor. A safety brief was delivered by the skipper.

Just after midday, the three men donned auto-inflating lifejackets and the boat departed for the anchorage. As the boat left the shelter of the land, the wind and sea state increased.

By the time the boat arrived at the merchant ship, the skipper had decided that it was too rough to transfer the technician safely. Following a discussion with the master of the anchored vessel, the skipper decided to return to port and reattempt the transfer the following day.

The skipper turned the fishing boat into the rough 1-2m sea and headed back to the harbour. Initially the fishing boat coped well with the conditions, taking only a small amount of spray onto the deck area aft. However, as one of the crew checked the self-drainers at the stern he noted, and reported to the skipper, that the boat was very low in the water. Concerned that the engine compartment might be flooding the skipper switched on the electric bilge pump.

A few moments later the fishing boat hit a large wave and the internal diesel engine stopped unexpectedly. The engine was re-started, but ran for only a short period before stopping again.

On opening the engine hatch, they saw that the compartment was flooded and that the engine was nearly fully immersed. The crew and passenger started to bail the water out as the boat took on a severe list.

However, without power the fishing boat quickly swung beam to sea, causing it to roll violently and waves to break over the side.

The skipper realized the boat was about to sink so made a “Mayday” call on his VHF radio. The call was acknowledged by the coastguard and the local RNLI lifeboat was launched. The skipper also called the merchant ship at anchor using his mobile phone to inform them of his boat’s predicament.

The fishing boat continued to food rapidly, and the men were forced to abandon the vessel as it sank. Once in the water, their auto-inflating lifejackets operated and kept them afloat.

The AIS transponders fitted to each lifejacket were quickly picked up by the merchant ship at anchor, which directed the lifeboat straight to the casualties in the water.

Each was quickly rescued, but the fishing boat was subsequently lost. It was not possible to determine the cause of the sinking with certainty.

However, the most likely cause is thought to have been catastrophic failure of the engine cooling water hose or hull fitting.

The operating company of the ship at anchor has retro-fitted similar transponders to working lifejackets on all company vessels.

Boat owners should review their bilge pumping arrangement and consider installing bilge alarms and automatic bilge pumps if they have not already done so.

It is essential that boat owners ensure that these items are inspected regularly and consider trying suitably sized bungs to through hull fittings and valves. If a failure does occur while underway the outcome, as in this case, can be unwelcome.