Lessons learned: Always run drills on how to deal with a salvage operation 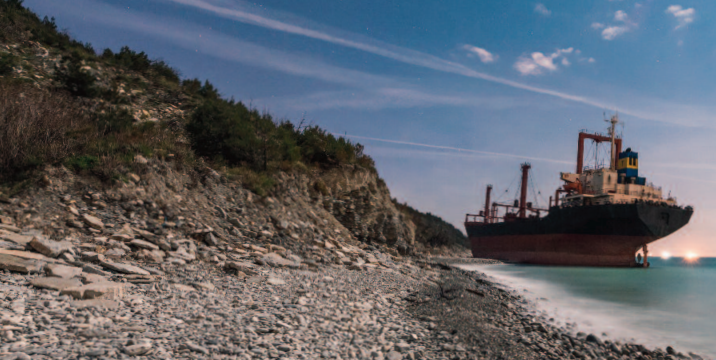 Swedish Club casebook describes a case where a vessel grounded during routine job in the engine room.

A vessel was in ballast and sailing about seven miles from land on its way to the loading port in the NW Atlantic. It was early spring with heavy winds blowing and large waves.

There was also some ice in the water, so the crew had to clear the lower starboard sea-chest which was blocked with ice. The crew changed to the upper intake and then removed the large cover from the lower sea suction filter, finding it choked with ice slush.

While removing the ice the main sea water valve, located on the side shell plate, began to leak.

Whilst the crew were replacing the filter cover, one of the engineers applied a large valve wheel key to the actuator valve, in an attempt to stop the leakage.

Too much force was applied damaging the gear mechanism that operates the valve spindle and water began leaking into the engine room at high pressure.

The crew made attempts to stop the leakage, but the pressure and volume of water were too great. Attempts to pump out the water entering the engine room were also unsuccessful as electric motors and control gear were splashed with sea water causing short circuits which disabled the bilge pumps.

The vessel blacked out and began drifting in the severe weather conditions approximately 6-7 NM off the coast. The coast guard arrived at the scene and tried to attach a tow line, however the attempts failed.

The vessel then dropped both anchors, but this did not stop the vessel from drifting. The vessel eventually grounded, and the crew was evacuated. The following day a salvage team boarded the vessel by helicopter. They were assisted by two tugs.

Wires were connected from the grounded vessel to the tugs. Fortunately the weather improved and the vessel was refloated and towed to the nearest port.

An underwater inspection revealed extensive damage to the vessel shell plating. Operations continued over the following days, cleaning the engine room spaces with high pressure hoses and removing the pollutant from the vessel.