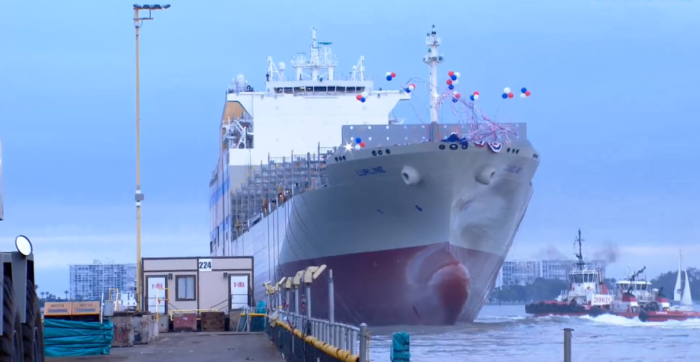 Specifically, the vessel is equipped with a 800 vehicles enclosed garage space or breakbulk cargo.

The vessel has LNG-capable engines and is the first of a two-vessel contract. The vessel is capable of speeding up to 23 knots.

According to the company's press release, Lurline was named in honour of the ocean deity revered in the native Hawaiian culture.

The first Kanaloa class vessel, is the sixth vessel to follow the name Lurline, which was originally given to Capt. William Matson’s second vessel, a brigantine built by Matthew Turner, Shipbuilder of Benicia, California in 1887. Named by sugar tycoon, Claus Spreckels, the vessel made its first sailing from San Francisco to Hawaii on June 16, 1887.

The second Kanaloa Class vessel will be the fifth Matson vessel to be named Matsonia. The first Matsonia was constructed for Matson, by Newport News Shipbuilding & Drydock Co., launched on August 16, 1912.

Nassco provided about $500 million for the construction of the two vessels. Both new vessels will replace three diesel powered ones that are actively serving.

The ones participating in the ceremony were General Dynamics NASSCO president Kevin Graney and Matson CEO Matt Cox. Constance Lau, CEO and director of Hawaiian Electric Industries and a Matson board of directors member, christened the ship with the traditional break of a champagne bottle on the hull.