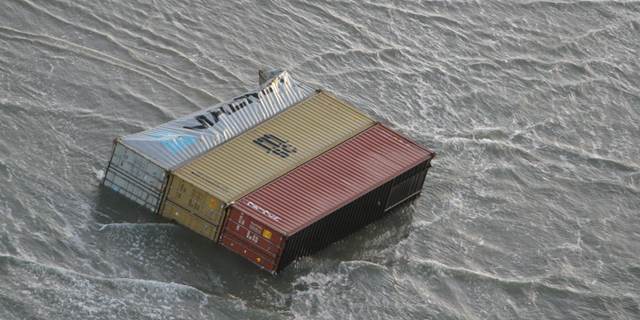 The large salvage of the containers that went overboard the MSC Zoe container ship last week is about to begin on the North Sea, according to the Dutch Directorate-General for Public Works and Water Management Rijkswaterstaat. Two large salvage vessels and a smaller one are deployed on behalf of the MSC.

The first large ship arrived in IJmuiden, North Sea Canal, on Thursday morning and is expected to go to the area today, 11 January, while the smaller ship is on the way.

The start is made with mountains in the navigation channel above the Wadden Islands. Depending on the weather conditions, the second large ship will join this weekend.

The salvage includes underwater cameras and ships with sonar installations from Rijkswaterstaat, In the meantime, the salvage company continue to search for containers that are still unaccounted for. So far, seven containers have been salvaged.

The ecological conditions and the safety of the recovery companies are taken into account. The storage of the containers is complex, partly because part of the containers on the seabed of the pressure ships lie in the channel.

In addition to the salvage, the US Coast Guard regularly carries out inspection flights to locate waste and containers.

How quickly the disposal of all containers can be completed depends on, among other things, the weather conditions, the shipping intensity, the visibility under water, the tide and the location of the containers.

The 19,224 TEU container ship MSC Zoe lost 281 containers during the night from January 1 to January 2 in North sea due to heavy weather, north of Borkum, Germany. The ship was heading from Sines, Portugal, to Bremerhaven, Germany, at the time.

Earlier this week, Mediterranean Shipping Company (MSC) confirmed that significant progress has been made in the clean-up operation in the North Sea and on the beaches of the Netherlands and Germany.

Last week, the company informed that it would pay the full costs of the clean-up operations and noted that it will continue searching the sea for the containers which fell overboard, 'until the last one is found'. It also ensured that the beaches of the Dutch and German coastlines are surveyed until all debris related to this incident has been cleared.