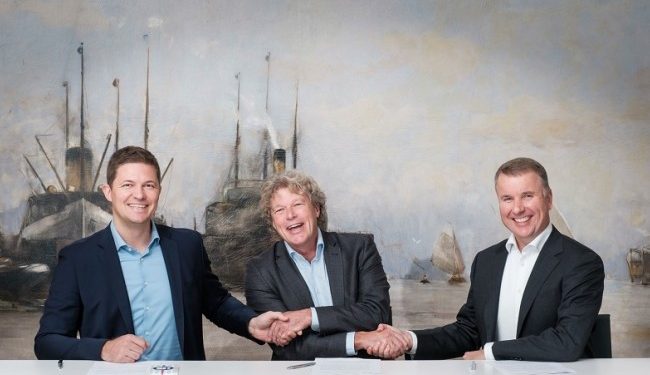 Tank storage company Evos, Hydrogenious and Port of Amsterdam signed a Memorandum of Understanding (MoU), ratifying their intention to jointly realize large-scale import facilities for hydrogen at the port of Amsterdam.

The facilities will comprise a Liquid Organic Hydrogen Carrier (LOHC) dehydrogenation plant with a final release capacity of up to 100-500 tonnes of hydrogen per day as well as related storage and handling facilities.

All three parties are founding members of the H2A platform, a platform that focuses on the development of supply chains for green hydrogen imports through the port of Amsterdam.

The realisation of a LOHC import terminal and a plant for the continuous, large-scale release of hydrogen are important additions to other planned activities in the port.

Such activities include the development of the regional and national backbone and various planned projects for hydrogen production in the North Sea Canal Area.

The next phase of this initiative will focus on exploring the spatial, infrastructural, and financial requirements to establish the terminal over the next years.

The objective is to have the first plants for delivery of hydrogen to local off-takers in operation before 2028, with the potential of further upscale. In total, the handled LOHC volumes will be at least 1 million tons per annum.

Following a completed feasibility study on different liquid hydrogen carriers, Evos, Hydrogenious and Port of Amsterdam are now taking this next step in putting Hydrogenious’ LOHC technology into action.

This study confirmed that LOHC technology is a compelling solution for use in the port of Amsterdam, compatible with the existing infrastructure. The Evos Amsterdam terminals need only relatively minor modifications to store and distribute LOHC in the port and beyond.

The location of the port of Amsterdam and the companies operating here and in the wider North Sea Canal Area, make our port ideally suited for such a terminal and plant