An explosion and fire aboard the articulated tug and barge 'Buster Bouchard' was the result of a lack of effective maintenance and safety management of the barge by the owner company, the US National Transportation Safety Board (NTSB) said in a report released Thursday.

On 20 October 2017, at 0430 local time, the crews of the articulated tug and barge (ATB) Buster Bouchard/B. No. 255 were preparing to get under way from anchorage to proceed into the Port of Corpus Christi, Texas, when an explosion and subsequent fire occurred on the bow of the barge.

Two barge crew members who were on the bow were killed in the explosion. The fire was extinguished about 1100 on the same day.

Approximately 2,000 barrels (84,000 gallons) of crude oil were released from the barge into the water or were consumed in the fire.

The barge sustained over $5 million in damage and was scrapped after the accident. There was no damage to the tugboat.

As a result of its investigation, the NTSB made the following safety recommendations:

Evaluate your company’s safety management system (SMS) with an independent third party to identify the areas that allowed for the poor mechanical and structural condition of the B. No. 255 and revise the SMS to address identified deficiencies.

With the American Bureau of Shipping, establish joint policy and procedures to share information, including all results and findings from audits, surveys, examinations, inspections, and other applicable activities related to vessel safety.

With the US Coast Guard, establish joint policy and procedures to share information, including all results and findings from audits, surveys, examinations, inspections, and other applicable activities related to vessel safety.

The series of failures documented during this investigation highlights the need for effective safety management systems, proper vessel maintenance, and thorough regulatory examination. If implemented, the recommendations issued as a result of this investigation will help to identify the failures that led to this accident and prevent similar casualties in the future, 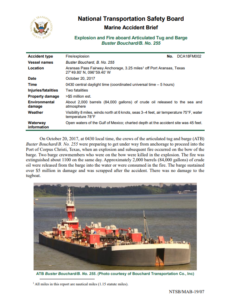