Lack of government support a new concern for seafarers

The Mission to Seafarers announced a strategic partnership agreement with the Shipowners P&I Club, which became the 2019 Gold Sponsor for the Mission’s ongoing Seafarers Happiness Index. In its Seafarers Happiness Index figures for the first quarter of 2019, the Mission revealed high levels of pride among crews, although ongoing issues such as insufficient training, poor meal choice and a lack of social activities onboard continue to have an alarming impact on their overall welfare.

The Index is made up of a standard set of ten questions and these cover key areas to measure how happy seafarers are about the various elements of their working life.

It may seem blindingly simple, but unless these areas are addressed and improved, then seafarers will not be happy in their jobs, and will either switch companies, or perhaps leave the sea. We urgently need more data, and to hear the stories of more seafarers…and for those who have already done so, to share again. We are building new online capabilities and applications to process the data, to make sure the voices at sea are heard. 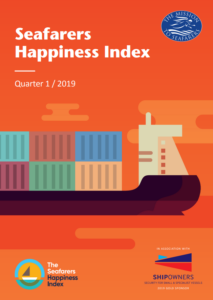