Lack of experience leads to collision between frigate and oil tanker 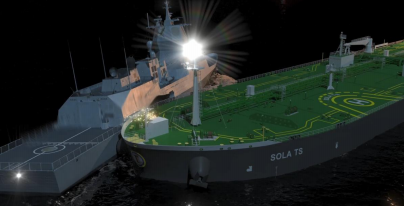 In the early hours of Thursday, November 8 2018, the frigate HNoMS Helge Ingstad, with 137 conscripts and permanent crew on board, and the tanker Sola TS, with 24 people on board and operated by the Greek shipping company Tsakos Columbia Shipmanagement (TCM) S.A. collided in the Hjeltefjord.

HNoMS Helge Ingstad sailed south at a speed of approximately 17 to18 knots with the automatic identification system (AIS) in passive mode, without transmitting AIS-signal. The frigate’s bridge team had notified Fedje Vessel Traffic Service (VTS) of entering the area and followed the reported voyage.

Sola TS had been loaded with crude oil at the Sture Terminal, and notified Fedje VTS when departuring. Sola TS exhibited navigation lights, and further to this, some of the deck lights were turned on to light up the deck for the crew who were securing equipment for the passage.

In advance of the collision, Fedje VTS had not followed the frigate’s passage south through the Hjeltefjord. The crew and pilot on Sola TS had observed HNoMS Helge Ingstad and tried to warn of the danger and prevent a collision. Whatsoever, the crew on HNoMS Helge Ingstad did not realise that they were on collision course until it was too late.

It was at 04:01:15 when HNoMS Helge Ingstad collided with the tanker Sola TS.

The first point of impact was Sola TS’ starboard anchor and the area just in front of HNoMS Helge Ingstad’s starboard torpedo magazine. In fact, the frigate suffered extensive damage along the starboard side and seven crew members sustained minor physical injuries. Sola TS received minor damages and none of the crewmembers were injured. Yet, marine gas oil leaked out into the Hjeltefjord; the Institute of Marine Research ascertained that the effect of the oil spill had little impact on the marine environment.

According to AIBN’s investigation a number of operational, technical, organizational and systemic factors may have led to the collusion.

It is firstly proposed that due to the clearance process, the career ladder for fleet officers in the Navy and the shortage of qualified navigators to man the frigates, officers of the watch had been granted clearance sooner, and consequently had a lower level of experience and had less time as officer of the watch than used to be the case. This may have also resulted in inexperienced officers of the watch being assigned responsibility for training.

Furthermore, it is reported that several aspects of the bridge service were not adequately described or standardized. It turns out that the bridge team on HNoMS Helge Ingstad did not manage to employ the team’s human and technical resources to detect that what they thought was a stationary object giving off the strong lights was in fact was a vessel on collision course.

In addition to this, organizational, leadership and teamwork on the bridge were not established during the period leading up to the collision. In addition to the limited experience of the officer of the watch, the training being conducted for two watchstanding functions on the bridge reduced the bridge team’s capacity to address the overall traffic situation.

Moreover, it is reported that when Sola TS set out on its northbound passage with the forward-pointing deck lights turned on, it was difficult for the frigate’s bridge team to see the tanker’s navigation lights and the flashing of the Aldis lamp, and thereby identify the ‘object’ as a vessel.

In addition to this, the shipping company Tsakos Columbia Shipmanagement SA had not established compensatory safety measures with regards to the reduction of the visibility of the navigation lights due to deck lighting. Besides, radar plotting and communication on the bridge did not sufficiently ensure the effect of active teamwork to build a common situational awareness. This could have increased the time window for identification and warning of the frigate.

The Norwegian Coastal Administration (NCA) had not established human, technical and organizational barriers to ensure adequate traffic monitoring. The functionality of the monitoring system in relation to automatic plotting, warning and alarm functions, was not sufficiently adapted to the execution of the vessel traffic service.

In fact, lack of monitoring meant that the VTS operator’s situational awareness and overview of the VTS area were inadequate. Hence, Fedje VTS did not provide the vessels involved with relevant and timely information and did not organize the traffic to ensure the tanker’s safe departure from the Sture Terminal.

Lastly, it is reported that in the southbound voyage, HNoMS Helge Ingstad sailed with AIS in passive mode. This meant that the frigate could not be immediately identified on the screens at Fedje VTS or Sola TS. None of the parties involved made use of available technical aids.

It is noted that is a challenge for maritime safety that the Navy could operate without AIS transmission and without compensatory safety measures within a traffic system where the other players largely used AIS as their primary source of information.

The Accident Investigation Board Norway proposes a set of recommendations.

Safety recommendation MARINE No 2019/05T: The Royal Norwegian Navy can establish competence requirements and procedures for training activity on the bridge, attending to both the training function and safe navigation.

Safety recommendation MARINE No 2019/06T: The Royal Norwegian Navy can consider the career path and the clearance process for officers in the Fleet in relation to the Navy’s manning concept for frigates, with a view to ensuring that bridge teams have a sufficient level of competence and experience.

Safety recommendation MARINE No 2019/09T: The Royal Norwegian Navy can review and improve its system for medical fitness assessment and follow-up with regards to vision.

Safety recommendation MARINE No 2019/10T: The Royal Norwegian Navy can review the use of AIS and ensure that adequate compensatory measures are put in place when using AIS in passive or encrypted mode.

Safety recommendation MARINE No 2019/11T: The Royal Norwegian Navy, together with the Norwegian Coastal Administration, can resume and formalize their combined effort to develop and implement guidelines for the use of Warship AIS in the Fedje VTS area, as well as in other Norwegian VTS areas as required.

Safety recommendation MARINE No 2019/12T: The Royal Norwegian Navy can review the operating concept and ensure that safety management and operational needs are compared as management parameters.

Safety recommendation MARINE No 2019/13T: The Royal Norwegian Navy can install VDR on the Navy’s vessels.

Safety recommendation MARINE No 2019/14T: The Ministry of Defence to introduce, particularly relating to critical functions, a system to give the Navy a systematic overview and positive control of hours of rest. In addition, a requirement for compensatory measures should be put in place when non-compliance with the provided hours of rest in the civilian protective provision.

Safety recommendation MARINE No 2019/15T: The shipping company Tsakos Columbia Shipmanagement S.A. can establish safety measures for the use of deck lights on vessels, which ensures that the deck lights do not reduce the visibility of the navigation lights.

Safety recommendation MARINE No 2019/16T: The shipping company Tsakos Columbia Shipmanagement S.A. may review and improve its practice relating to cooperation on the bridge and safe navigation on vessels under pilotage.

Safety recommendation MARINE No 2019/17T: The Norwegian Maritime Authority may address the industry in general with regards to the use of deck lighting which could reduce the visibility of the vessel’s navigation lights.

Safety recommendation MARINE No 2019/18T: The Coastal Administration can review and improve how traffic monitoring is conducted, with regards to manning, tasks and technical aids.

Safety recommendation MARINE No 2019/19T: The Norwegian Coastal Administration may review and improve its procedures and practice for traffic information. 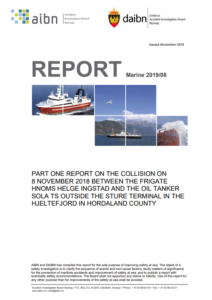