by The Editorial Team
in Regulation, Security 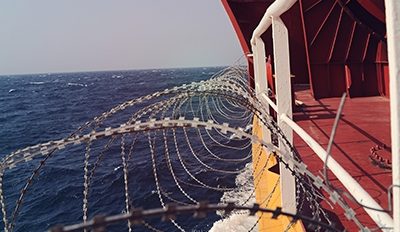 The Ministry of Communications in the state of Kuwait’s issued a Ministry Resolution increasing the ISPS level for all ports  within Kuwait to ISPS L2. Although many incidents had been occurred before, the 9/11 attack in United States triggered the development of ISPS Code.

Following a review, Kuwait resulted to:

In order to get to the conclusions above, the Minister of State for Services Affairs reviewed the constitution. Amiri Decree issued on 12/8/1986 concerning the functions of the Ministry of Transportation.

Amiri Decree No. 5 in 2017 concerning the functions of the Minister of State for Services Affairs. Council of Ministers No.1003 Decision No. 2/64 held on 23/11/2009 on the formation of the Standing Committee to follow up and implement the International Code of the Security of Ships and Port Facilities (ISPS Code).

Ministerial Decision No. 700 of 5/8/2018 on the Restructuring of the Standing Committee for the Follow-up of the Implementation of the International Ship Security Code and the Port Facility.

Concerning the International Ship and Port Facility Code – the ISPS Code, SAFETY4SEA provides an insight into the brief review of ISPS Code implementation, explaining its key elements, the key personnel and its challenging areas.

In the meantime, in SAFETY4SEA’s latest SeaSense column, experts provide their opinion on whether the code can boost the maritime security against modern security threats such as cargo theft and terrorism.